Unable to wake Azel, and with both Craymen and the Emperor dead and the Tower’s forces spreading throughout the surrounding lands, Edge was lost as to what he should do. Eventually he paid a visit to his old hunter friends, who were still crossing the wastes in their travelling caravan. Edge was mildly surprised to find a Seeker waiting for him there, a man who had apparently been sent by Gash.

This man had been instructed to give Edge directions to a place called the Seekers’ Stronghold, which Edge admitted he had never heard of before. The man conceded that this was not surprising, and as Edge could get little more information out of him he decided to head for this place immediately. 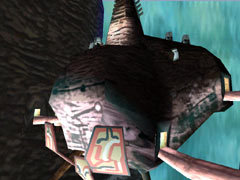 The dragon rider arrived at the hidden stronghold.

When Edge arrived at the stronghold he entrusted Azel to the Seekers, who assured him that they would be able to care for her. As Edge explored the structure, he found himself amazed at the sophistication and size of the Seekers’ operation; it was quite unlike what he had expected. When Edge met up with Gash, his old friend at last revealed the true nature of the Seekers to him; as Edge had gathered by now, they were no simple band of disorganised outlaws as they had led the world to believe.

The Seekers were a massive organisation, and they had strongholds like this one scattered throughout the known world. They were committed to the accumulation of knowledge: every relic, every forgotten record, every fragment of ancient technology that they acquired gave them a greater understanding of the Ancient Age and all its horrors. The Seekers’ overriding purpose was to bring the influence of the Ancients to an end, to free the world from their long shadow and to give humankind control of its own destiny once again. Gash had recently risen to a position of power within the Seeker culture, and he had become the leader of the Seekers.

Gash explained that the Towers were far from benign.

Gash confirmed what Edge had by now come to realise: that the activation of the Tower of Uru was certainly not in humankind’s best interests, no matter what the cold and detached Craymen had believed. The Tower was sending its pure-type monsters out into the surrounding regions so that they would assault and oppress human life wherever they found it.

According to the ruthless logic of the Towers’ programme, if humankind was kept oppressed and struggling then it would not be able to grow and advance, and if it could not advance then it could not ravage the environment with its technologies again, or risk annihilating itself in global war. This was the will of the Ancients, who in their arrogance had made this decision for all of humankind: a decision that cared for nobody’s values but their own, a decision that showed no regard for individual lives. This was what the Seekers despised.

For humans to be free, the Towers needed to be destroyed, and this was why the Seekers needed Edge. As far as Gash could tell, Edge’s dragon was the “Divine Visitor” that the Seekers had sought for so long; the dragon would be able to destroy the Towers, and the dragon would become humankind’s salvation. Gash was unable to explain any more however, as he needed to attend to his duties as the Seekers’ leader; he directed Edge to one of the compilers, a wise man named Zadoc, for further explanations.

Zadoc informed Edge that it would take many hundreds of years to destroy each of the world’s Towers individually (as the Heresy Program had been doing in the past), but it seemed as if there might be a way to shut every one of the structures down simultaneously. The Towers were linked together by an ancient data network known as Sestren, and within this network dwelled the artificial intelligence that oversaw the Towers’ operation.

If this AI could be destroyed, then all of the world’s Towers would sleep forever. This was why the Seekers needed Azel; she had been created to interface with the Tower’s systems, and she would be able to open the data transformation gateway at the heart of the Tower. This was the portal that could transfer Edge and his dragon into the data network, where they could face the AI itself.

Azel had experienced her first dream.

It was not long before the Seekers succeeded in reviving Azel, although she was somewhat disoriented when she returned to consciousness; she had experienced her first dream, or rather her first nightmare, and it had genuinely unsettled her. Abstract human qualities such as the ability to dream were normally nonexistent or suppressed in the mind of a drone, but Azel was a highly advanced example of her kind, gifted with a great intellect. Influenced by the varied and traumatic events that she had experienced, it seemed that Azel was becoming more receptive to her emotions and feelings; essentially, she was becoming more (psychologically) human.

Grig Orig was out of control, infested with pure-type parasites.

Unfortunately it was not long before the stronghold itself came under attack from the monsters that the active Tower had released; swarms of parasitic creatures had infested the Imperial flagship Grig Orig, and the massive vessel was heading straight towards the stronghold, firing its deadly weapons in all directions. Knowing what he must do, Edge set out on his dragon to destroy the terrible ship once and for all.