Still unsure of the ruthless Craymen’s intentions, Edge arrived at the Tower of Uru searching for answers if nothing else. Once there, Craymen spoke to him at great length on many important matters, and he also enlightened the young dragon rider as to the Towers’ true purpose.

The Towers were the most immense structures built by the Ancients.

Essentially, he told Edge, the slumbering and deactivated Towers formed a planetary control system. They had been created by the Ancients to maintain the health of the ravaged world, to restore its damaged environments and to preserve the life forms that inhabited it.

The Towers’ programme had involved the production of pure-type monsters, and although it appeared that most bio-engineered creatures existed to destroy humankind, the purpose of a Tower’s pure-types was ultimately to save humankind from extinction.

Craymen informed Edge that a Tower’s pure-types existed to eliminate the destructive forces of humankind - embodied by the Empire, in his opinion - so that humankind as a whole could not be consumed and annihilated by war.

Craymen also explained why he had needed Azel all this time; every drone that the Ancients had designed existed to fulfil specific duties, and Azel’s purpose had been to interface with the Tower and to operate its systems. This was why both Craymen and the Empire had sought her so desperately; the Empire intended to use the Tower as an ultimate weapon that would afford them limitless power over the peoples of the world, and Craymen intended to activate the Ancient structure so that it would simply destroy the Empire on its own.

The Empire had unfortunately reached the Tower themselves, and their ships were infiltrating the vast structure as the two of them spoke. If control of the Tower fell into the Empire’s hands, Craymen warned Edge, the damage they could do with it would be inconceivable; although Edge could not forgive Craymen for his crimes, he did see the sense in stopping the Empire. Returning to his dragon, Edge headed up into the body of the Tower to hold them off while Craymen set about reviving Azel. 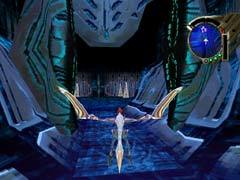 The structure was an endless maze of passageways and rooms.

The Tower itself was the most immense kind of structure left behind by the Ancient ones, and it took Edge some time to ascend through the many floors, corridors and passageways housed by the technological monolith. Edge purged the Imperial invaders wherever he found their ships floating through the vast and gloomy corridors, and he eventually made it all the way to the Tower’s summit. There, Edge confronted and ultimately destroyed the battleship that was leading the invasion, but his victory was more than hollow; Imperial transmissions revealed that this infiltration had merely been a diversion for him and the dragon. Edge rushed back to the bottom of the Tower, worried as to what fate may have befallen the Tower’s control room.

Edge had to dismount the dragon before he could enter the control area again, and he thus walked right into the Empire’s trap. Upon entering the vast room, Edge found himself face to face with the Emperor himself; the Imperials already had Craymen and the revived Azel at gunpoint, and it seemed that all was lost. The Emperor shot Craymen, wounding him, and Azel rushed to the aid of her fallen master. As she crouched over him, the foolish Emperor ordered her to activate the Ancient structure, and Azel obeyed, fulfilling Craymen’s vision.

An enormous pure-type monster was released into the room.

Energy surged through the dormant Tower, bringing its Ancient systems back online and awakening the armies of pure-type monsters that had slept within its walls. To the Emperor’s horror a vicious pure-type guardian was released into the control room, and it did not delay in fulfilling its Ancient duty; with its massive scythe-like claw it slaughtered the Imperial soldiers, put an end to the Emperor’s life and, finally, finished off the wounded Lord Craymen.

Firing his Ancient weapon furiously, Edge was somehow able to fend the beast off. Carrying Azel, who had lost consciousness at the sight of her master’s death, Edge returned to his dragon and fled the Tower as fast as he could. 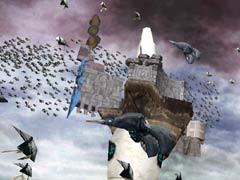 The monsters engulfed Grig Orig and the Imperial fleet.

Now that the Tower was completely active it finally unleashed its legions of pure-type monsters, which swarmed the remaining Imperial vessels clustered around the structure, annihilating the lesser ships and finally engulfing the mighty Grig Orig itself. Despite what Craymen had implied though, the Tower of Uru could not help but reveal its true nature: it was an instrument of oppression, designed to bring the human race to its knees. The monsters surged on, heading for the surrounding lands where they would crush and subdue humankind.