It turned out that Georgius was an area of open sea to the north of the Forbidden Zone; it was also the place where Lundi and Lagi destroyed the flying Tower, Shelcoof, at the end of Panzer Dragoon Zwei. When Edge arrived there, he found that the region was dominated by an enormous, relentlessly writhing tornado that rose out of the dark waters.

On closer inspection, it seemed that the tornado was being caused and perpetuated by numerous Ancient Age relics and devices that surrounded it; using the dragon’s lasers, Edge set about destroying these ancient artefacts. When the last one crumbled and fell into the water, the tornado dissipated - to reveal Shelcoof, the ancient flying Tower, airborne once more and somewhat repaired; evidently the relics had been mending it. 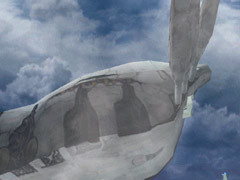 The Tower of the sky, Shelcoof, emerged from the storm.

Of course Edge did not understand the significance of his find, as he assumed that the flying Tower was only an ancient airship, a mistake that both Lundi and the Empire had made in the past. Edge salvaged some relics and he returned to Paet in Zoah, but the dragon rider’s untrained eye had not been particularly good at choosing what to take; Paet bluntly explained to him that what he had found was useless Ancient Age junk. He told Edge to return to Georgius and to bring back something better, if he still wanted to know about the mysterious island Tower.

Back at Shelcoof, Edge found that a large portal had been forcibly opened in the side of the great vessel. Curious, he dismounted his dragon and set off into the interior of the ship, where he eventually came across an Imperial salvage operation. Many battleships and fighters were docked within Shelcoof, and large quantities of equipment lined the vessel’s massive interior.

Many Imperial ships were docked within the vessel.

The Empire had not forgotten the immense power demonstrated by Shelcoof in the past, and now they were eager to exploit whatever technologies it could yield to them. Shelcoof’s Guardian Dragon - which Lundi and Lagi thought they had destroyed - had also been recovered by the Empire; like the vessel itself this dragon was in a state of semi-repair, but luckily it was still dormant and unconscious. Unfortunately for Edge, it was not long before he was sighted by the patrolling Imperial troops who guarded the site; a chase ensued, and Edge was captured and knocked unconscious.

When he came around, Edge found himself in the interior of an Imperial battleship. An officer was interrogating him; it seemed that the Empire believed he was in league with Craymen, or that he at least knew something about the Tower that Craymen had gone to. Edge could give his captors no answers though, and they eventually gave up, leaving him tied up on the floor and alone in a room.

To Edge’s surprise, his old friend Gash emerged out of a panel in the ceiling of the room, dropped to the floor and freed him. It turned out that Gash had an interest in what the Empire were trying to salvage in Georgius, too; the Seekers seemed to understand the great danger that the Empire was inviting by disturbing Shelcoof and its guardian. He and Edge escaped onto the deck of the ship, where Edge found that they were no longer inside Shelcoof, but high above the clouds; his dragon was waiting for him. 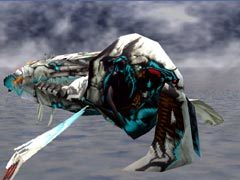 The Guardian Dragon awoke and annihilated the Imperial ship.

Edge was forced to repeat the task that Lundi completed decades ago, and in the battle that followed his dragon was able to destroy the lethal creature; its body shattered and tumbled towards the ground far below. When all was safe again, Edge’s dragon underwent yet another physical metamorphosis, growing ever stronger.

Edge returned to his camp with Gash, but he realised that he still hadn’t managed to find any Ancient Age relics for Paet. To save him the trouble of returning to Georgius, the Seeker produced some genuinely useful ship parts, and handed them to Edge; grateful, the young dragon rider parted company with his strange friend once more.

When Edge returned to Paet though, it turned out that he wasn’t so concerned about the relics anymore. Paet had found out about Edge’s dragon, which Edge had been keeping well away from villages and settlements up to this point.

Paet had repaired a monitor linked to an ancient observation network, and he often used it to gaze at the nearby Ancient Age installations and facilities. While looking at Georgius through its screen, he had inadvertently caught sight of Edge riding his dragon. Paet’s life was dedicated to researching Ancient technologies, and the dragon was perhaps the most amazing piece of Ancient Age technology that he had ever had the chance to encounter. Paet was eager to meet the creature, and Edge conceded to let him at some point in the future. 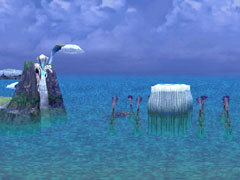 Edge was directed to the ruins of Uru.

Paet reluctantly admitted to Edge that the monitor network was the only way he knew about the Tower, though. He had seen it through the monitor’s display screen, and the machine had also produced the photograph-like picture for him - but he had never been anywhere near the structure itself, and consequently he had no idea how to travel to it directly. Paet did know the location of an Ancient Age facility whose passages allegedly led to the Tower, though: the ruins of Uru, which existed out in the vast lake to the east of Zoah.