Chapter 7: The Village of Zoah

Edge at least had a definite destination to head for after that battle. Although the location of the mysterious “Tower” that Craymen had gone to was of course unknown to him, he knew that it logically had to be in a nearby region. 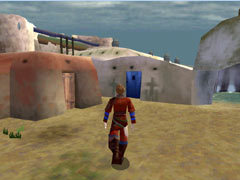 Edge arrived in the village of Zoah.

Edge visited the hunters’ caravan again on his return, and he learned that they were travelling towards a large settlement called Zoah. Mounting his dragon again, Edge flew on ahead of them, hoping to find more information about Craymen and the Tower there.

Zoah was a busy and reasonably normal Frontier settlement, although it was rigidly divided into two very different districts, each of which had its own separate community. Beyond a great set of locked gates was the wealthy and religious Holy District, which Zoah’s other residents either desired to live in or despised, for various reasons. The other half of the town formed the poorer and more commercial Liberal District, where outsiders came to trade and do business; it was here that Edge began his search. 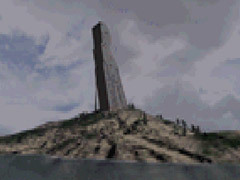 It was the same structure that the dragon had shown to Edge in visions.

Edge asked around for a while, and it was not long before he chanced across some relevant information: the owner of the local bar was able to show him a small picture of the mysterious Tower itself. It was the same monolithic structure that Edge had seen in the dragon’s visions of the future, which the creature evidently wanted him to reach. The barman let him take the image, (which was the equivalent of a photograph created by Ancient Age technology,) and he directed Edge to the person responsible for it, a man named Paet.

Paet was an eccentric young man who spent his days tinkering with relics and technologies from the Ancient Age, which he relentlessly worked on in a small yard in the Liberal District. His main project was the restoration of a small antigravity engine, the kind the Empire used for its fighter ships, and he one day planned to turn into a functioning airship of his own; it seemed that his progress was considerably slow, though. 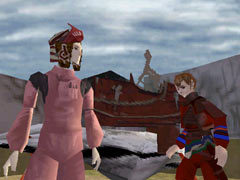 Paet requested that Edge find him some Ancient Age relics.

Paet was annoyed at Edge for bothering him at first, but he struck a deal with the young dragon rider nonetheless. If Edge could recover some Ancient Age relics for him from a place called Georgius, Paet agreed that he would give him information about the Tower.