When Edge arrived at the Forbidden Zone, he found that it was a waterscape littered with ruins and relics from the Ancient Age. Upon entering the area, Edge inadvertently triggered an ancient security system, and unfortunately the largest relic - which the ruins’ automated voice identified as a “Sky Transporter” - became deactivated and locked.

By reassembling the pieces of the Sky Transporter’s seal, Edge was able to reactivate the relic and use it to be transported far above the clouds; it was there that he finally caught up with Craymen’s flagship and its escorts. The Black Fleet ships were no match for the dragon, and with the escorts destroyed and the flagship disabled, Edge boarded the craft. 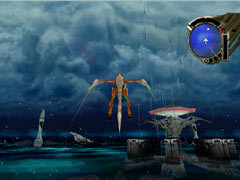 On the silent bridge of the ship Edge found Craymen’s second-in-command, a man named Arwen, whom he recognised from the excavation site. Arwen was sitting wounded in the commander’s chair, and he revealed that Craymen was long gone; apparently he would have already reached his destination, and arrived at the ancient Tower that he sought.

To Edge’s surprise, the disabled ship was hit by a huge explosion, and when the smoke and light cleared an enormous black dragon swooped into view beyond the shattered windows. The rider of this beast was none other than the mysterious girl that Edge had seen in the ruins beneath the excavation site. She had evidently been awakened, and seemed to be fiercely loyal to Craymen. Edge rushed back to his own dragon, diving out into the open sky; the girl and her dragon, the monstrous Atolm, followed and continued to attack him.

Craymen's second-in-command Arwen was in the commander's chair.

Edge was attacked by the black dragon known as Atolm.

Atolm was an immensely powerful living weapon from the Ancient Age, but he was evidently weak after the millennia of slumber that he had endured. Edge’s dragon proved to be more powerful in battle - for the moment, at least - and the girl wisely chose to escape to safety, riding away on the black dragon and disappearing into the clouds. Edge was left alone, mystified as to what her role in all this truly was.