Returning to the dragon, Edge flew out through the Imperial excavation site and entered the gloom of the valleys beyond. After some time he chanced across a lone man riding a coolia, who was being pursued by an arachnoth, an enormous and deadly mutated monster; taking advantage of the power of his dragon, Edge saved this defenceless man from the beast. Grateful for being rescued, the man revealed that his name was Gash, and also that he was a Seeker. 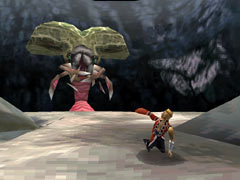 Edge found a man being chased by an arachnoth.

Due to the Imperial propaganda that Edge had been subjected to for some time, he was under the impression that the Seekers were no more than a group of troublesome outlaws, dangerous thieves who plundered the ruins of the Ancient Age. The mysterious Gash almost took offence at this assertion, as in reality the Seekers’ actions were simply no worse than those of the Empire; the Seekers did not use the technologies they excavated to conquer and dominate their fellow humans as the Empire did, either.

Gash’s coolia had unfortunately been lost during the battle with the arachnoth, so rather than leave him stranded out there in the wilderness Edge agreed to give the Seeker a lift. According to Gash, there was a village known as Cainus not too far away.