The Guardian Dragon that emerged from the pod was almost a different creature entirely, as Shelcoof had augmented it with massive amounts of armour and weaponry, clearly in an attempt to annihilate Lundi and Lagi. As the Guardian Dragon readied itself for battle, Lagi also underwent one last metamorphosis of his own; he took on the physical form that would one day be called the Solo Wing, the ultimate form of the dragon. 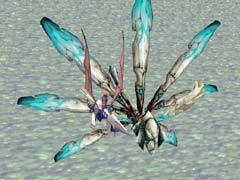 The two dragons did battle over the open sea.

The final battle took place above the open sea, with the morning sun piercing through the thick clouds. The Guardian Dragon was immensely powerful, and it unleashed laser and missile weapons of all kinds at the pair, even resorting to physically ramming Lagi with its massive armour-plated body. Despite all its enhancements though, the Guardian Dragon could not match what Lagi had become. The ancient monster fought on even after its armour had crumbled away, and in the end it could not help but be destroyed; the Guardian Dragon fell into the waves before exploding in a cascade of light.