In the ensuing battle Lagi swooped over, inside and around the enormous craft, annihilating the swarms of Pure-Type monsters that populated it. Drawing close to the front of the vessel, the pair were even able to destroy half of Shelcoof’s main float engines. 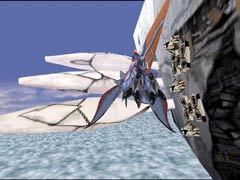 The flying Tower was an immensely powerful and well-defended structure though, and it would clearly take more and greater force to really bring it down. Lundi and Lagi also had a more immediate concern, as the Guardian Dragon had disappeared into a cocoon-like pod on Shelcoof’s underside; they laid siege to the pod, and even as they were forcibly breaking the Guardian Dragon out it spewed waves of lasers at them.