A review of Panzer Dragoon.

Science fiction does an unparalleled job of giving us a glimpse into the future. Sometimes we don’t like what we see because looking into the future is like looking into a mirror where we see ourselves staring back at us. Imagining where we can take a wrong turn helps us steer clear of it if we can remember to put our hands back on the steering wheel.

Kyle can only watch as the Blue Dragon's rider dies before his time.

The dragon lands next to Kyle and the rider reaches out to him.

Panzer Dragoon was a Saturn launch title which showed the world what the fledgling console could really do if developers knew how to tap into its full potential. Sadly for the Saturn, such games were few and far between. Players fill the shoes of a young hunter named Kyle who begins the game by exploring a barren world that’s been stripped of nearly all life by war. He soon finds himself in the wrong place at the wrong time when he stumbles over two dragons locked in an aerial fight to the death. A black dragon is chasing a smaller blue dragon until the Blue Dragon is thrown into the air by a ground shaking fireball, and his rider is subsequently shot through the chest by a beam laser that he never saw coming until it was too late, resulting in the death of the Blue Dragon’s rider.

Kyle takes the reigns of destiny.

Before he dies, the mysterious masked rider reaches out his hand to Kyle and connects with his mind, and during the rider’s final moments, Kyle is pulled into a vision where he finds himself floating helplessly before a black tower in the middle of an ocean. Kyle sees the black dragon that he saw before enter the tower, and it opens up as if it were a machine, then he hears a soft voice struggling to speak in his mind asking him to stop the dragon from returning to the tower, presumably to stop the dragon from bringing it back to life. Then with his last breath the rider only has time left to say one last thing: “Please”. Green energy spirals out of him like blood pouring from an open wound, then the rider falls silent and his lifeless body falls to the ground dead. The armoured Blue Dragon mourns the death of his rider with a heart piercing roar, then looks at Kyle, and with a gentle cry asks for his help. Picking up the weapon of the dead rider, Kyle refuses to let his death be for nothing, and decides to finish what he began, and thus, players are swept away by fate.

If you weren’t a believer in destiny before then you are now. 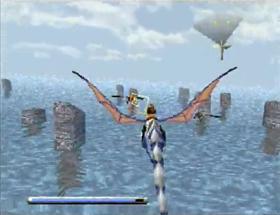 Although nothing special now, these graphics were beautiful for the time.

Not a bad start for a mere rail shooter. By rail shooter, we mean the player flies through locations on a fixed track with limited room to steer, so it’s more of a rollercoaster ride only with a dragon who shoots lock on lasers from his mouth while you, the rider, can shoot at anything in 360 degrees by turning the camera with the Saturn’s shoulder buttons. Although the dragon is stuck on a predestined flight path you do have some room to move to dodge incoming damage as you shoot down anything flying in the way. For the time, the colorful texture mapped polygons vibrating with life stood out from the crowd, and the Saturn was given the chance to show off its processing muscle with some beautiful rippling water effects that reflect scenary on their moving surface. 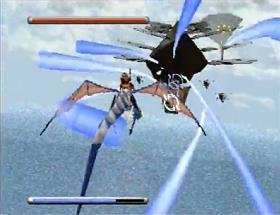 You can lock onto multiple targets at the same time and blast them into oblivion.

The world itself is filled with giant mutated insects thirsty for blood and hungry for flesh (the giant man-eating sandworms are clearly remiscent of Dune), and scattered with ancient living bio-mechanical weapons of a long forgotten past which are so advanced that even empires don’t stand a chance. They return from the past armed with laser beams that can cut through concrete to stop our dragon saviour from saving the present world. On top of all of that, we meet plain good old fashioned flying warships built by human hands from the excavated lost technology of the old world that still cripples the planet to this day to stop it from starting anew, and here you have the makings of a truly alien world.

Of course, nowadays, Panzer Dragoon is too oldschool for its own good in today’s market like much of hardcore Japanese gaming, and that’s a shame, but if you are not riding the latest trends then you’re being crushed by them. It’s a great shame because the cinematics would be on par with Blizzard’s in today’s market if they had been allowed to keep evolving. They capture the feel of the moment in ways that cannot be rendered in real time graphics, so I can only wonder what the future had in store for this series if it had one.

This is a short but sweet adventure split up into seven levels called episodes. It won’t last long, but if you do enjoy oldschool rail shooters, you will enjoy it while it lasts. Thanks to the ability to turn the camera and how you are forced to stop enemies from blocking your path, it feels like an interactive ride. Even the music is timed to reflect the mood of the moment. You can’t watch your way to the end, but that’s all part of the fun. Your dragon can lock onto multiple enemies at the same time then unleash homing lasers when you let go of the attack button while the dragon’s rider can fire pulse lasers as fast as you can hit the button. The dragon sees through his rider’s eyes so can lock onto anything you see at any angle.

The game’s art is so remarkable that it has weathered the storm of time even to this day. The art doesn’t age. That’s a testament to how much imagination was poured into this game; most games from this time period were forgotten a long time ago but not this one. The game’s art is incredibly unique and therefore succeeds in being timeless.

What fascinated me the most about this series was the whole story of science clashing with morality, mirroring a struggle in the real world where we as a race are locked in a race to tame nature. The people of the Panzer world took that concept a few steps further to a whole new level by creating vicious bio-mechanical predators as weapons wielded in a war against themselves, leaving behind a trail of endless destruction in their wake. 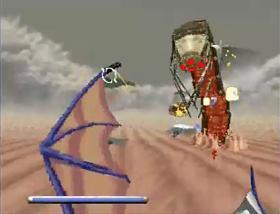 The giant sandworms are very reminiscent of Dune.

Fast forward ten thousand years to a world on the verge of repeating the mistakes of the past with those creations coming back to haunt their creators as they dig up ancient history. People being at their best when things are at their worst because there is simply no other choice seems to be a huge theme that prevails here. This is especially true as you can see from the man-made sky fortresses armed to the teeth with cannons which fill the screen. That always goes hand in hand with an insatiable hunger for power that always leads people down a path of self-destruction because in our quest to rise above one another, there’s no such thing as too much power. Such is the potential locked away within us all thanks to our inseparable need to rise above it all. Why does our potential for good only come from fixing our own mistakes and repairing damage that should not have been done? It’s a question I always have to ask myself and I can never find the answer.

Like I said, it’s not a bad story for a rail shooter. In fact, it’s a bit wasted on a game that doesn’t let you explore it to soak it all up. Thank goodness someone had the good sense to see the potential for an RPG set in this world.

Panzer Dragoon is a great game for what it is. As it stands, most of the enjoyment derived from this game comes from blowing everything out of the sky, if you’re not admiring the art. You can’t let anything stand (or in this case fly) in your way.

Any self-respecting Saturn fan should have at least one copy of this if only to preserve the memory of this truly underrated console. It’s worth owning for that reason alone. Unlike the later games Panzer Dragoon has orchestral music. That’s yet another reason to buy this game. This game is a work of art so it’s worth buying a copy.