A discussion of Panzer Dragoon's ending and the possible aftermath of Kyle's forays into the world on the back of the dragon we all know and love. And one that stretches the imagination just a little. 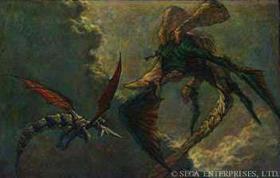 Once Kyle and the Blue Dragon, aka the Heresy Dragon, vanquish the evil Dark Dragon whose sole purpose was to awaken a Tower containing the physical horrors of the Ancient Age, they venture into the Tower itself without delay. One could argue that there’s not much meaning to be had from the cinematic ending, but as usual, I couldn’t disagree more. Let’s analyse the obvious ramifications that something as simple as eradicating a Tower, in its most literal sense, can have on the arid world depicted in Panzer Dragoon.

The Blue Dragon entering the Tower.

The Blue Dragon flies into the Tower to enter a long corridor made of a very fine metal material that somehow refuses to bear anything even resembling a reflective surface. In Kyle’s eyes no human could build such a place sculptured in alien patterns and lines that almost resemble veins, or could they? The seemingly metallic hall has stood here for thousands of years and yet has no rust rotting it away nor any signs that it has aged even a day. It cannot help but make you wonder who or what built this place, not to mention with such random patterns carved into the walls not unlike scars.

Kyle is just along for the ride.

Unlike the first and second dragon riders, Kyle has no control over the general direction in which the dragon chooses to go. Kyle wonders what will happen next now that he’s fulfilled the mission a dying warrior handed to him like one generation after the next taking the reins of destiny. Did fate carry him away or was he simply in the wrong place at the wrong time? Kyle will no doubt ask himself these questions until the day he dies and still never find a satisfactory answer. But what happens now, now that the task is complete and the job is done? What does the future have in store for Kyle who finished what the dragon’s original rider started? What does the future itself hold?

The Blue Dragon looks at his companion with a knowing glint in his eye.

The Blue Dragon looks back at his friend thinking the exact same thing: it’s time to let go. The dragon fixes his eye on Kyle and stares at him as if in contemplation, showing that he’s far more aware of the world around him and conscious of events than one might think at first glance. He fails to see why Kyle should continue riding with him into the jaws of self-destruction; consequently, the dragon keeps Kyle out of harm’s way. It’s almost enough to lead you to believe that this is a one way trip, but not for both of them.

Kyle has no clue as to the nature of the cloudy bubble appearing around him. He feels himself being lifted away, but why? The huge orb, of course, is designed for his own protection. You start to wonder if the dragon isn’t planning on coming back, but after what Kyle has just been through, he might start becoming nostalgic for the good old days of firing arrows into giant insects. But I doubt it; some people are born to live on the edge of all things.

Kyle is pulled away to safety.

The Blue Dragon charges up until it explodes.

Kyle is pulled off by the bubble formed by the dragon he would call his friend, but never his. The partners brought together by tragedy finally part ways. Kyle drops the gun he likewise never truly owned, but borrowed from a corpse, and can now only watch as events unfold before him. The gun falls to the ground which can disprove any theory he might’ve kept it. However, endings in Panzer Dragoon games never tell the whole truth, nor do the events they portray happen exactly the way we witness them. A detail or two is sometimes prone to change. Just watch the Panzer Dragoon Zwei endings which occur before Panzer Dragoon if you doubt my claim.

The dragon looks back again to make sure Kyle (now floating stationary behind him) is safe, then focuses on the task ahead of him. Kyle watches the dragon fly further down the corridor; at the same time, the dragon charges up his horn with enormous amounts of pure energy. He is becoming the weapon he was meant to be in order to ensure that the Tower can no longer threaten the world.

The Blue Dragon flies far into the distance never to be seen again.

Then pure white energy begins to flood the corridor.

The dragon disappears into the dark corridor, at the far reaches of Kyle’s line of sight. Before he realizes it, pure white energy fills the corridor and swallows Kyle in the blinding flash of light. He barely has enough time to cover his eyes before the blast wave hits him.

When the Sky Rider shows Kyle the Tower, the clouds and the sea waves nearby are shifting in swift fluid motions at the same abnormal pace (clouds do not pass over that fast under normal circumstances, let alone with equal super-fluid grace). The wind currents were being manipulated to alter their movement rate for some unknown reason.

The Tower is here one moment.

The dragon’s energy keeps building up until he explodes, utterly vaporizing the ancient Tower. Or so it seems. Maybe it was scattered across the bottom of the ocean. Again, it makes me wonder how the dragon survives if he turned his body into a bomb. The Empire sends ships to investigate the aftermath not long afterwards to find the Tower completely gone. Absolutely no trace of the ruin remained if the Empire’s records are to be believed; the Empire would need to find another Tower if it wanted to abuse its power. You’d think that the Empire would learn from its mistakes, but it seems some people are immune to wisdom.

Then is gone the next.

Kyle awakens from being unconsciousness for an unknown amount of time. The sun had set when he entered the Tower but now daylight pouring from the clouds brightens the sky. The bubble shielded him from a blast of vaporizing proportions and now the dragon is nowhere to be seen or found except in footprints all around him. Did the dragon survive? How could anything survive such devastation? All that remains of the dragon is the world he left behind. For now.

He looks up to the sky as if something was different, and indeed, something was. Pillars of light penetrate the thick clouds above him, and over the coastal sea where the Tower once stood. What changed? What difference did taking the monolith out of the picture make? Perhaps now nature could freely run its course again; it was as if the Tower was holding nature back. Who knows? We may never know. But of course, as always, it’s never boring and always fun to speculate. I can’t help but wonder. I, however, have no desire to live in that world where even nature herself was once held prisoner.

The skies have healed.

So, what did the Tower’s destruction accomplish? A voice resonating through the Tower proves that it was partially active before its guardian dragon became close enough to fully bring it to life. Even in a dormant state, the Tower influenced its surroundings to a limited degree. The Towers guarded an ecosystem they created by controlling the weather it seems. This Tower wasn’t able to unleash its guardians until the Dark Dragon arrived, but it may have had enough power to sustain a different environment. Maybe it altered the atmosphere to keep the light rays we see from seeping into it.

Destroying the Tower restored the natural environment from something the Tower tried to sustain. More proof lies in the world reshaping itself when all the Towers are deactivated permanently. Maybe the Towers were built to prevent a changing climate, or maybe they were built to create a new one. If the Towers were built to regenerate the planet, you’d think ten thousand years would be an adequate amount of time to do so unless it was irrevocably scarred. Perhaps the Towers were working towards creating a climate undesirable to humans. But in that case, why did the Towers keep humans alive? Why allow the human race to survive at all? I suppose we’ll have to be content to pile this mystery on top of the mountain of others. 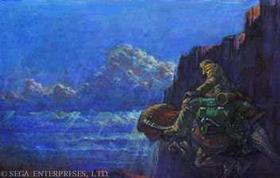 And what of Kyle? In the final piece of artwork found in the end credits, Kyle is seen staring up at the sky which is full of the same pillars of light penetrating the clouds that we see in the final cinematic sequence. Alone, the image suggests that Kyle returned to his former life. He began the story by hunting down a man eating predator, and we know how this story ended. Somehow I doubt he faded quietly into the background. I imagine he continued to make a difference in his own way.