The Mystery of Orta's Gun

Whether deliberate or initially unintentional, make no mistake: the mystery of how Orta acquired her gun is indeed a mystery.

The human/drone hybrid Orta and main protagonist of the Panzer Dragoon game of her namesake wields a powerful Ancient Age weapon as her very own throughout the course of the game’s many episodes, yet the gun itself fails to materialise in any of the game’s cinematic sequences. The full motion video (FMV) sequences seen in Panzer Dragoon Orta were filmed before the design of the gun was actually finalised according to reliable sources, meaning its absence wasn’t deliberate at all. 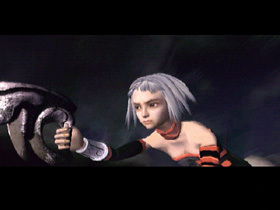 Orta might not know why she was created, but she sure as hell knows where she found her gun.

The fact of the matter is the absence of Orta’s gun from the introduction sequence, and the reason why the gun isn’t present in the subsequent full motion video sequences is all attributable to the creators’ lack of foresight apparently. The intro, which might have otherwise explained where she acquired the gun before blasting her way through episode 1 with it, leaves us with more questions than answers. It is as if we aren’t supposed to notice that she is carrying nothing one moment, then wielding an ancient pulse laser cannon the next.

Reshooting full motion video footage is very costly, and therefore probably ruled out the option of making a few creative edits. Still, why would Smilebit shoot these cinematic sequences in the full knowledge that Orta wouldn’t carry a gun in any of them when the inclusion of a gun was planned from the start… unless there was more to this apparent oversight than meets the eye? Not having all the answers keeps us asking questions. Being kept in the dark makes us search for light, and thereby brings us to life. Maybe the mystery is doing the job that it was designed to do, or maybe I am just reading between the lines far too much for my own good.

If anyone wants to believe that the lack of an explanation for the origins of Orta’s gun was an inconsistency borne of creator oversight when Panzer Dragoon Orta is brimming with so much attention to detail, then they’re merely exposing an amateurish plothole torn open by the creators themselves. Why would the creators spend so much time and energy perfecting the game only to leave a huge gaping plothole for all to see? I believe the lack of an explanation for the appearance of Orta’s gun was intentional. Nothing in the game, not even in any of the in-game sequences rendered by the beautiful in-game graphics engine (which are easier to edit than cinematic sequences) explains where Orta’s gun came from. Was this an oversight too? I doubt it. In each Panzer Dragoon title in the original Saturn trilogy we watch how and where each dragon rider finds their own weapon: Lundi is seen lifting an ancient laser weapon from the ashes of Elpis at the very beginning of episode 1 in Panzer Dragoon Zwei, Kyle pries his gun from the cold dead hands of the Sky Rider, and Edge finds a gun bearing a dragon design in an ancient ruin. In Panzer Dragoon Orta we witness no such thing despite how relatively easy it would’ve been to implement. Editing in something to explain where exactly, if anywhere, the gun originated at the start of the game was far from impossible, which inevitably raises the question: how and where did Orta find her gun?

The function of Orta’s gun actually changes whenever the dragon morphes in the game almost as if the gun and the dragon are telepathically linked or synchronized. The dragon could hold the key to this mystery. Lundi’s gun becomes more powerful as Lagi evolves throughout the course of Panzer Dragoon Zwei, and Edge’s gun doesn’t even function until Edge mounts his dragon. The dragon himself could be the source of their power, otherwise Lundi must’ve upgraded his gun or changed the power output settings, and Edge simply forgot to turn off the safety switch on his (although the gathering dust of sitting in the same place for ten thousand years probably drained it of its power). Orta’s gun could be a biological weapon somehow tied to the dragon (however unprecedented this may be), but we may never know.

Unless someone wants to confirm that the origins of Orta’s gun wasn’t meant to be a mystery, then it will remain a mystery (as opposed to the product of a mistake). I’m more prepared to accept that the whole issue was intentionally left unresolved to maintain the tradition of unanswered and unanswerable questions mounting in the wake of each game in the series before any explanation holding an unintentional mistake responsible. Not only are we left asking how Orta was created, but we’re forced to wonder where her gun came from too. Perhaps it’s a mystery best banished to the fires of hell where it belongs, but we shall remain persistent in our pursuit of the truth nonetheless.