The Writing of Panzer Dragoon

This article looks at similarities and differences between the various symbols that form the Panzer Dragoon language, and speculates on where the people who speak this language may have inherited it. 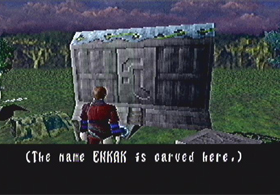 A question that arises when thinking of the Panzer language is what exactly does the writing look like. In Panzer Dragoon Saga, when you first enter the Caravan, you will notice a wagon next to the entrance of the item shop. When examining the front of the wagon, a message will appear saying, (the name Enkak is carved here). The front of the wagon has a symbol that looks like a series of different shapes. Could this be the way Enkak is written in Panzer language? Even the Item shop tent, the pink, purple, and blue banners, the provisions, bedding, tools, spices, and the hunting equipment boxes have a series of symbols on them. I haven’t the slightest clue as to what the item shop tent and banner symbols might say, because you can’t examine them. Could the symbols on the boxes actually be Panzer writing? In the Liberal district in the town of Zoah, a unique symbol can be seen on the entrance. Is this the symbol for item shop? In the Seekers’ Stronghold an assortment of similar symbols can also be found. 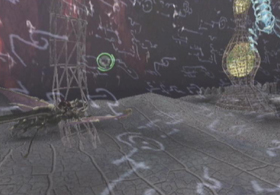 The halls of Sestren are filled with strange characters. The language of the Ancients?

In Panzer Dragoon Orta another form of unique writing can be found moving throughout level 7 Forbidden Memories. This writing looks very different from the writing found throughout Panzer Dragoon Saga. Could this be the true Panzer text that the Ancients used? What I can conclude from this is with the downfall of the Ancient civilization, the band of humans that survived, lost the knowledge of how to write the Ancient text or did away with it altogether, in favor of a new form of writing. Maybe to the survivors, it was a way to start over, to put the wretched past behind them. The survivors reinvented the Panzer writing, and it eventually developed into the writing I mentioned in Panzer Dragoon Saga, a series of shapes and symbols. The writing found in Sestren, level 7 of Panzer Dragoon Orta, could have been a way for the Ancients to leave behind the true Panzer text, for future generations to find and interpret. Do these shapes and symbols have any meaning? Are they nothing but nonsense, a series of many different shapes? These symbols may very well be what the Panzer writing looks like. Most of these symbols are on many of the things you can examine in Panzer Dragoon Saga. When you get an explanation on what you examine, it feels like the game is translating the symbols for you. So have we finally found the answer to what the Panzer writing actually looks like? We might very well have.