Prototypes? Prototypes of What?

The Dark Dragon was also known as the Prototype 02 dragon, but prototype of what? This article sheds light on a possible explanation, including ideas about the pup left behind in Shelcoof.

Credited to Excavation Camp forum members who incite a hell of a lot of discussion. 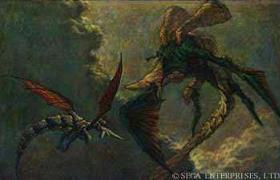 If truth be told, both the armoured Blue Dragon and the black “Dark Dragon” seen in Panzer Dragoon are Solo Wing dragons, except the former is in its normal form and the latter is in its spiritual form, but both dragons are the same breed even if regarded as separate altogether if you keep in mind their Panzer Dragoon Saga designations that you also find given to them in Panzer Dragoon Zwei. I emphasize the quotation marks for the “Dark Dragon” because we don’t really know if that was his official title or an accident of his name being translated from Japanese into English.

In Panzer Dragoon Zwei, the familiar armoured Blue Dragon is named the “Type 01” dragon in the unlockable Pandora’s Box options screen. Seeing as how this dragon is the final reachable form in all the Saturn games, it’s not a stretch of the imagination to presume that this is the dragon’s most powerful metamorphic state. Likewise, the Dark Dragon of the original Panzer Dragoon is called the Type 02 dragon; again, according to Panzer Dragoon Zwei. Is the game trying to tell us something? You cannot help wondering if these dragons are somehow related.

Type could possibly be an abbreviation for prototype, and if so then both dragons were prototypes of something. They could even be on an evolutionary ladder or test subjects for something far greater that the Ancients had in mind. The Type 02 dragon was sent to hunt down the armoured Blue Dragon outside of Sestren aggressively, so perhaps it was sent specifically for a reason. Perhaps it was the only dragon that stood any chance of success given their connection to each other. The Dark Dragon bears a similar horned head to the Type 01 dragon, which makes me question their relationship, if any.

Were they merely a type of dragon or in fact prototypes, and if so, prototypes of what? The Sestren AI also refers to the black dragon as “D-Type 01”; if only zero meant proto, then it would be the final piece in this jigsaw puzzle. 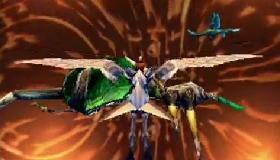 Notice how Sestren is a Type 01 dragon or Solo Wing dragon in its normal form?

Otherwise we’ve yet to encounter the most powerful dragon. However, both dragons could’ve been prototypes of the Light Wing. The Type 02 dragon and the Light Wing both have sinister glowing red eyes. The Solo Wing dragon was more powerful than the Light Wing, but only because the Light Wing project was never fully completed. That is, a Light Wing dragon itself was never completed. Edge’s dragon just used the D-Unit data to upgrade himself; it was never meant for him. And one last compelling reason: the particular Ancients who created the Light Wing deemed it to be the ultimate dragon, even going as far as to describe it as a messenger of the gods.

The Ancients defined it as such because they perhaps saw themselves as the gods of whom it served as a messenger. It was their creation after all, so stands to reason that it would be a messenger of its creators, but we cannot know for sure. Maybe these Ancients made the dragon in something else’s image. Something they saw as more godly than even themselves. At most, they thought they were gods themselves, and it seems that they later paid the ultimate price for their arrogance. 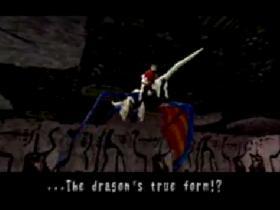 Here's the familiar armoured Blue Dragon also known as the Type 01 dragon which is also a Solo Wing dragon in its normal form.

Still, even if you gather all the Light Wing information to bring it to completion, the Solo Wing was still more powerful. You still have to enter the Light Wing form before having the power to unlock the Solo Wing. That’s interesting if you think in terms of metaphors to say the least (i.e enter the light to become an individual flying solo in the verbal sense).

I think that these dragons were all prototypes of sentient dragons capable of morphing a living creature into a dragon and we only saw two because, as in the case of the Light Wing project which was cancelled perhaps never to be seen again if the rulers of the world had their way, these Ancients feared losing control of something that had a mind of its own. In this case, their worst fears were realised when the Heresy Dragon decided to turn on its own masters. It seems that they were already on the verge of losing control.

At the end of Panzer Dragoon Zwei, Lagi hibernates inside Shelcoof where Lundi later finds a dragon crest. In Panzer Dragoon Saga, this crest can be found, and we assume that Lagi left all his previous DNA data (containing his former physical shapes) in it, in the form of a baby dragon which can be found inside of it. Edge’s dragon can merge with the baby to become the Solo Wing dragon, which can morph into his old Panzer Dragoon Zwei dragon forms including: the Brigadewing, Windrider, Skydart, Type 02 and Type 01. Each form corresponds to a skill: Defense, Attack, Agility, Spiritual and Normal respectively. I always thought that Lagi changed his form to best suit any given situation in Panzer Dragoon Zwei (i.e. he evolved by himself, not according to a design template), but the very fact that the Solo Wing dragon in Panzer Dragoon Saga can morph into the Dark Dragon alone suggests that all these forms are of Ancient design and not just the product of adaptation. Lagi could have always morphed into the dark dragon form if he wanted.

Another popular theory is that both the Type 01 and Type 02 dragon were prototypes of the Solo Wing dragon, which of course, can morph into both (in Panzer Dragoon Saga). The Ancients clearly designed these aforementioned dragons a long long time ago with a purpose in mind. When the dragon morphs into either the Light Wing or Solo Wing, he’s reached the fullest potential of someone else’s design. He seems to have broke his own programming mentally and spiritually, so the question is or then becomes: can he exceed his (designed) potential?