Could Iva Be the Next Dragon Rider?

Orta's ending suggests that she will return for the next game as the main dragon rider, but is her return really set in stone? Perhaps a less known character will take her place instead.

Iva Demilcol, the next dragon rider?

We all endlessly await the next Panzer Dragoon game. We wonder, who will be the next dragon rider? Will it be Orta? The ending may very well have lead us to believe so. But you may all have forgotten about a certain imperial boy named Iva, who was against the Empire and despised war. His story was abruptly touched upon and left you wondering at the end. I believe he may be destined to become the next dragon rider, not Orta.

During Iva’s stay with the seekers in Epeisodion 6, the seeker Emid had a strange feeling about the young boy.

Emid: “And, I…I felt something…Almost like it was destiny when I found you out there in the desert.”

Emid: “I don’t know why…But I sensed within you the power to change things.”

Maybe the dragon will sense this in Iva too and make him the next rider on a plight to change the world. You may think to yourself, Iva died, he couldn’t possibly be the next dragon rider. Well, here is where my theory comes into play. As you all now from playing through Iva’s story, he drank from a well full of polluted water. As a result, Iva ingested a life threatening virus. With the help of the extracted bodily fluids of bio-engineered creatures, the spreading of the virus could be stopped. The stronger the creature the more effective the medicine would be. To stay alive, Iva had to take this medicine every day. With his last pill gone, Iva was left with an empty medicine container and little hope for the future. But to Iva’s surprise, included inside the medicine container were some last words from his departed father.

Iva’s father: “I extracted chemicals from the bodily fluids of a bio-engineered creatures, and created a cure that I tested on you. While it did not cure your illness, it stopped the virus from spreading, and you somehow miraculously survived…. The medicine you are now currently taking is the medicine that I created from the fluids of a dragonmare… There was not a creature in this world from which I could make a medicine to save you.” 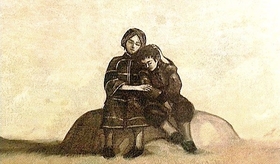 The end of Iva's story?

Shortly after reading his father’s note, Iva supposedly died, with no medicine left to keep him alive. But the question that remains is, could he be saved? He very well could be. The strongest healing powers came from the fluids of the dragonmare, but Iva’s father overlooked one amazingly strong creature, the strongest creature alive in the Panzer world, the Heresy Dragon, the dragon of destruction. With Iva’s inevitable death drawing near, the baby dragon found in the ending of Panzer Dragoon Orta, would find him and use its miraculous healing powers to either cure or keep Iva alive. A new bond would be formed between Iva and the baby dragon. As Iva grew older so would the dragon. The baby dragon would soon sprout wings and fly into the sky, destined for a new adventure with Iva as its rider.