Coolias seem to come in many shapes and sizes as evidenced in this theory. The question is, are we seeing evolution at work with different coolias adapting to different environments, or a lack of consistent modelling?

Throughout the Panzer Dragoon series the coolia has played a major role in transportation for various factions of people such as: hunters and Seekers. In Panzer Dragoon Zwei, in the village of Elpis, coolias were even raised to become mounts for the Meccania cavalry. This creature is one of the few beasts of burden to be successfully tamed and domesticated. By observing the coolia closely I have found certain inconsistencies with its appearance, over the course of each Panzer Dragoon game.

...and large round heads.

Lets start with the coolias found in Panzer Dragoon’s intro sequence. As Kyle and his hunting team ride across the vast terrain, we get a clear view of the coolia’s appearance. The coolia’s head is quite big and round. Its nostrils are also considerably large and connected. Each of its two eyes are small and circular. Lastly, we can also see it has two sets of arms, short in length as well as a small, thin, protruding tail. With a good picture of the coolias from Panzer Dragoon, we move on to the coolias in Panzer Dragoon Zwei. 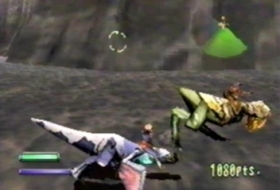 This coolia from Zwei episode 2 has a short stubby tail and no arms.

From viewing Panzer Dragoon Zwei’s intro sequence, it’s pretty safe to say the coolia’s appearance hasn’t changed much from the first game. In actual game play, this however, is a different story. In episode 2 as you shoot down the caravan tents, a coolia and rider will emerge, running for their lives.

Looking at the coolia closely, you will notice its tail is no longer short and thin, but short, stubby, and fat! Another thing to point out is the coolia’s skin color is no longer gray, but green. I’ve also made the observation that it doesn’t even have its two sets of arms. Whether this is a different type of coolia from the ones seen in the intro sequence, is not known. With this in mind, we move on to Panzer Dragoon Saga.

In Panzer Dragoon Saga as you enter the traveling caravan, you will find a lone coolia indulging itself with junio seeds. This coolia has a much smaller head than the coolias found in Panzer Dragoon and Panzer Dragoon Zwei. It also has two separate nostrils rather than one connected, large nostril. Its tail is also short and pointy. While visiting the Liberal District in the town of Zoah, you will eventually find another coolia walking around near Aldo’s house. While the first coolia at the caravan appeared more mammal-like in appearance, this one seems to look more reptile-like in appearance. In the ending movie, we also see Gash and Azel riding another variation of this reptile-like coolia throughout the desert. Our final coolia observations bring us to Panzer Dragoon Orta. 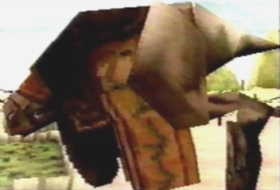 A mammal-like coolia from the caravan. 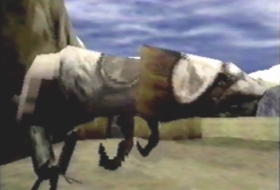 A reptile-like coolia seen in the Liberal District.

In Panzer Dragoon Orta, If you have a good eye and look closely, you will see coolias stationed amongst the Seekers in episode 1. This most certainly is not the best way to observe them. Within Pandora’s Box after selecting the encyclopaedia, you will find a section called “Creatures”. Listed under mutated monsters, we are able to view info about the coolia. We learn that aside from farming uses, the coolias in Panzer Dragoon Orta haven’t changed much and are still used for ground travel. Seeing how their purpose hasn’t changed, it’s apparently obvious its appearance has changed even more considerably, since Panzer Dragoon Saga. It’s a shame we can’t zoom up on it more closely, but it’s close enough for us to be able to notice some major changes. Just like the Panzer Dragoon Zwei coolia, it appears that the Orta coolia, has also lost its short stubby arms. Its tail is now very thin and long, closely resembling the coolias from the original Panzer Dragoon. Lastly, the most extreme change I must point out, is its beak-like mouth. Now the coolia has bird-like features as well as reptilian features! So this begs me to ask the question: Are there different species of coolia? 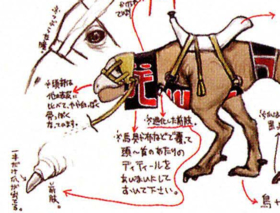 This official artwork from Panzer Dragoon Orta clearly shows that the Orta coolia’s short arms have evolved into tiny stubs. Does this prove my coolia evolution theory to be fact?

Another more plausible theory would be that Team Andromeda kept changing the coolia design ever so slightly, therefore making its appearance inconsistent with each new game. However you look at it, there are at least two types of coolia in the Panzer Dragoon world: mammal-like and reptile-like. I have the pics to prove it! Whether it be two separate species, or the act of evolution and natural selection, the constant change of the coolia’s appearance over the course of the Panzer Dragoon series must not be overlooked, but closely taken into consideration.