This theory explains exactly what the gold and black four winged starfish creatures (that we see in the ending of Panzer Dragoon Saga) are and resolves the confusion surrounding them.

Before we fight the artificial intelligence controlling Sestren at the end of Panzer Dragoon Saga, we watch a flashback of previous events where we see two four-winged creatures that almost look like giant starfish fighting for control of Sestren in what seems to be the distant past. The two creatures are identical apart from the fact that one is gold and the other is black, and the only difference between the two seem to be their intentions, which are reflected by their colours. It doesn’t take a genius to see that we are watching the birth of the Heresy Dragon Program who was obviously no friend of the system. Based on appearances alone, it seems only logical to conclude that the gold starfish-like creature was another dragon program, because it looks identical to the Heresy Program (see the images below to see what I mean). 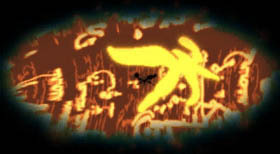 In any case, the gold dragon program is seen purging the rebel dragon program from Sestren space soon after, and for this reason it’s often assumed that the gold dragon program was Sestren itself even though we never actually fight a gold four winged dragon, for the want of a better word. In fact, we never encounter anything like it, and yet we can be led to believe that it was Sestren taking matters into its own hands because it’s rooted in the fact that the Heresy Program does eventually take control of Sestren by literally replacing the Sestren AI. Therefore it stands to reason that the Heresy Program was literally a copy of the Sestren AI because nothing else could fill Sestren’s empty shoes once the AI was gone, only instead of becoming a part of the system, it destroyed it from the inside out.

Nevertheless, I want to put an end to the ambiguity surrounding the gold dragon program which has arisen in the wake of Panzer Dragoon Orta. The Heresy Dragon Program isn’t gold in Panzer Dragoon Saga, even if it is in Panzer Dragoon Orta. I wrote this theory in order to clarify the reasons behind the Heresy Dragon Program’s changing outward appearance from the first time we see it in Sestren’s domain to the last. The following full motion video shots were captured from Sestren’s first memory orb, which recorded the Heresy Program’s escape from Sestren space, aka the Sestren data circuit, before the events of Panzer Dragoon Zwei took place. Behold the beginning of the end of Sestren: 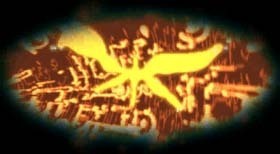 The gold dragon program seen in Sestren is generally considered to be the Sestren AI itself.

The gold dragon program, or starfish-like creature, seen fighting the black Heresy Dragon Program, almost matches the gold colours of the eerie patterns drifting in Sestren’s tunnels, supporting the theory that it is the Sestren AI itself. The gold dragon program blends with its environment as if it was a part of it, meaning that it would not be hard to imagine that it was indeed Sestren. It’s a logical conclusion to reach based on everything that we know, and I would not blame anyone for doing so; Sestren Exsis and the Heresy Program were both AIs given physical form, so it stands to reason that they’d look/seem almost identical as well if only to work naturally within that environment like blood cells running through our veins like second nature. Anything foreign could not survive there for long without disrupting the natural flow and order of things. 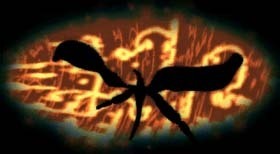 This entity/dragon program we see at the same time is as black as night. The pitch blackness of the black intruder on its current golden surroundings forces it to stand out as something that doesn’t belong here like a shadow on the wall. How and why it originated in Sestren is unknown. All we know is that the Sestren AI was designed to control the Tower network and oversee the completion of the task assigned to the Towers regardless of whatever stood in the way, whereas the black Heresy Dragon Program was designed to destroy it. To coin an old cliche, they are opposite sides of the same coin. In any case, the black dragon program seems to deliberately contrast with its environment as an intruder to let us, the viewers, know that it wasn’t a part of the system, and wasn’t welcome here. 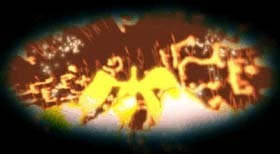 The gold dragon program blasts the Heresy Program out of Sestren.

The gold dragon program, which is assumed to be Sestren, wastes no time in blasting the black Heresy Dragon Program out of Sestren space. After the gold dragon program fires several equally golden laser beams at the invading black dragon program, green energy particles start to leak from the black intruder like blood pouring from a wounded body. The invader is on the receiving end of what seems to be almost fatal damage and is purged from Sestren like a virus. At this point the Heresy Program’s attempt to take control of Sestren was brought to an end before it even had a chance to begin, or so it seems.

Wounded, the black dragon program itself spirals out of control through the tunnel and rapidly descends into the outside world, leaving a trail of green energy in its wake. This reinforces the fact that the black dragon program was the Heresy Program because the coolia it soon occupies (namely Lagi) emits the same green light on his neck. An ominous light someone once said. 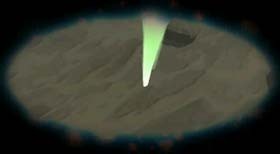 The Heresy Program spirals out of Sestren into the real world. 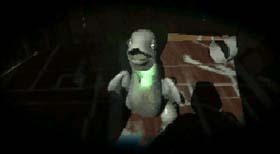 Of course, the Heresy Program soon finds its way into Lagi.

At the end of the memory orb, the Sestren AI shouts the words: “Impurity detected, pursue at once”. The Sestren AI aimed to eliminate something that wasn’t meant to be in its system or the world it maintained via the Towers. It then pursued the impurity using the tools at its disposal (i.e. Shelcoof and the Dark Dragon). The Heresy Dragon (after the program had changed a coolia into a dragon), however, later returns to Sestren and returns the favour. 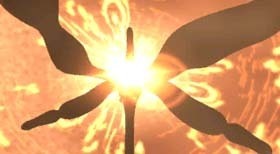 The Heresy Program reveals its true form to Edge.

When Edge encounters the Heresy Dragon Program at the end of Panzer Dragoon Saga, it is indeed black. The Heresy Program absorbs and reflects the light sent out by the shining golden patterns that seem to be drifting endlessly in circles around it in Sestren space, thus at times creating the mistaken impression that it’s gold.

What I find strange is that Sestren space seems to be a virtual reality, and yet it’s a physical place (at least to the senses) that ties all the Towers together. It seems to exist outside of time where memories of the past can be brought back to the present and used as a weapon against you. If it were a virtual reality, then you could simply turn off the hardware, because a virtual world is still a representation of something that physically exists.

We often thought that the dragon and the black four winged dragon seen at the end of Panzer Dragoon Saga were the same dragon but in different forms. The dragon and the Heresy Dragon Program were only the same in that they were different parts of the same whole. Basically, the physical dragon was the Heresy Program’s other half. When the black Heresy Program escaped from Sestren, it found its way into a male coolia that Lundi saved from an early death and named Lagi. The coolia was host to the Heresy Program and became the Heresy Dragon, but still had a mind of its own. The presence of two wings were a clear sign that the Heresy Program had already begun tampering with the coolia’s natural growth to put him on a new evolutionary path which would see him take flight. The physical dragon separated from the Heresy Program when it took its real form again, and in so doing, he became the ageing mortal that his DNA originally intended for him to be. His skin even resembles the green skin of the mutant coolia that he once was. 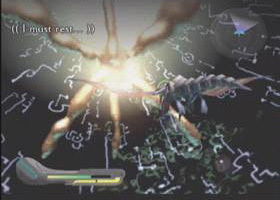 The dragon bids farewell to the gold Heresy Program in a memory of a conversation that took place not too long ago.

In Panzer Dragoon Orta during another visit to Sestren space, we witness one of the dragon’s memories in which he is having a rather one sided conversation with the Heresy Dragon Program before the two dragons go their separate ways. The first thing that you will notice is that the Heresy Program has undergone a noticeable change in appearance: it has gone from black to gold. What at first may seem to be a confusing change, makes sense if we go back in time to the beginning.

To deactivate all the Towers, a quicker means would be to kill the entity controlling them (the Sestren AI at the center of them all), take its place, and then shut them all down at the source. Azel opened a window of opportunity that may very well have remained closed without her, leaving the Heresy Dragon no choice but to destroy all the Towers one by one in the real world. The Heresy Program’s change in colour may indicate its newfound role as part of the system. It has now become one with its environment and therefore blends in with it. I wouldn’t be surprised if the Heresy Program was a reprogrammed copy of the Sestren AI and was simply returning home.