What Happened to the Natural Creatures?

Humans barely survived the downfall of the Ancient Age, but what happened to the natural animals of the Panzer world? Did they go the way of the dinosaur or were there more sinister reasons surrounding their extinction? 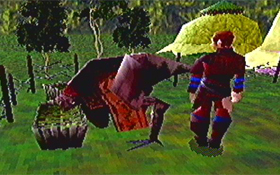 Coolias. Natural inhabitants of the Panzer Dragoon world or creations of the Ancients? 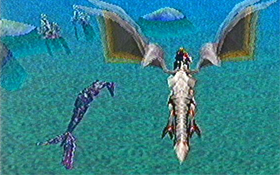 Edge thought these whales were extinct which shows how rare they are.

As we all know, supposedly, all of the creatures in the Panzer Dragoon world, either mutated or pure blood, were created by the Ancients. But where are the creatures that originally inhabited the planet, for example, like Earth’s mammals? The only creatures that seem to have not been altered or created by the Ancients, are the white birds at the excavation site, the worms in the Garil Desert, the many species of sea creatures swimming about under the water in the underground ruins of Uru and the mother tobitama with her young at the Uru ruins in Panzer Dragoon Saga. These creatures are absent from the creature list in the game. So does this mean that these creatures are not mutated or pure blood? Are they the only original species? The only domesticated animal similar to a dog that seems to be unaltered is the coolia.1 None of the inhabitants in Zoah or the Caravan have any domesticated animals other than the coolia. Did the Ancients alter and experiment on all original creatures on the planet for their own maniacal purposes? One reason why we don’t see any unaltered creatures is because the biological creatures with their enhanced abilities could have made the unaltered creatures their main food source, resulting in their utter extinction. Another theory could have been the altering of the environment by the Towers. With the drastic change in the environment, the unaltered creatures could have been killed off, lacking the necessary survival skills of the biologically enhanced creatures to adapt to their environments. Were there any original unaltered creatures in the world of Panzer Dragoon? We might never truly know the answer but we can always make our assumptions.