The Mystery of the Light Wing Project

Long ago the Ancients designed the ultimate form of dragon, but all of a sudden all records of its existence were ordered to be wiped from history. There were certainly people in the Ancient Age who knew more than we do.

The rulers of the Ancient Age created a wide variety of biological weaponry, but the most fearsome of all their creations were easily the dragons. During the same time period that Azel was created, a group of scientists based in the genetic engineering labs of Uru conceived of what they considered to be the ultimate dragon. They named this dragon form the Light Wing. Either the Ancients who created the dragon were very arrogant, or believed the dragon possessed unsurpassed abilities, because for one reason or another they considered their creation to be a messenger of the gods. Of course, it’s questionable whether these gods truly were divine beings, or whether they were merely human beings who believed that they had the power to become gods by daring to mimic nature’s natural creation processes. 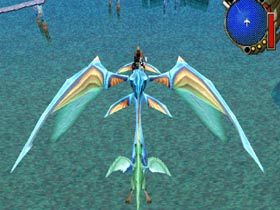 What was once believed to be the ultimate dragon stretches its wings.

Now comes the mystery. The organization overseeing the development of the Light Wing, known only as “the Institute”, decided all of a sudden and under mysterious circumstances to not only cancel the project, but order all records regarding its existence to be destroyed. It is as if they didn’t want anyone to know that it existed at all. It seems that the Ancients had actually succeeded in designing the Light Wing, but had not yet created a physical dragon from the design template. For all intents and purposes, the Light Wing never left the development stage. The scientists who were working on the project did not leave a record of the reasons for the cancellation of the project, but it seems that they were just as puzzled as we are about its abrupt end. The fact that the project was complete is enough to make one question why the Ancients decided against using the Light Wing for their own mysterious purposes. Did they have something to fear from this “ultimate dragon”? Did they fear losing control of it? 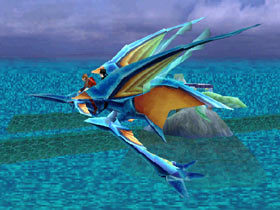 Edge and Azel fly the Light Wing over the shimmering lakes of Uru.

The Light Wing was deemed a renegade project by the Institute according to the data tablets left behind in the Uru laboratories. Those words by themselves offer at least a partial explanation for the project’s cancellation, although the ultimate reason for why deleting all records of its existence was even necessary will perhaps forever remain a mystery. The scientists who worked on the project must have considered their work to be very valuable, as they disobeyed orders and held onto the information regarding the inner workings of the Light Wing. The Light Wing’s creators concealed this information within a memory plate, which they divided into twelve pieces called D-Units, and scattered them across the Continent where Panzer Dragoon Saga is set. Ten thousand years after the Ancient Age ended, the Light Wing was at last recreated when Edge’s dragon assimilated the DNA data contained in these D-Units and used it to morph his malleable body into the Light Wing. Effectively aiding Edge in his quest to destroy Sestren Exsis, the Light Wing ultimately became a part of the solution to the Towers that were deciding the future of the world, rather than becoming a part of the problem. We might not know all the reasons for why the project was abandoned, but the final journey of the Light Wing certainly wasn’t a peaceful one, nor were its powers used for peaceful purposes.