The Mystery of that Huge Gaping Hole

The Fallen Ground is home to more than the skeletal remains of an Ancient city. Wars of unimaginable destruction have cut deep into the land and left a permanent scar behind revealing long buried secrets below the surface.

During the third episode of Panzer Dragoon Orta, Orta encounters a group of Wormriders who think that she is riding a dragonmare from the Empire. Orta is forced to fight Mobo, but after she defeats him he conveniently decides that her dragon is not actually a dragonmare after all, and that they should call it even. Mobo leads the dragon and its rider through a shortcut in the form of a scraggy scar in the planet’s surface that leads into a deep underground cavern. 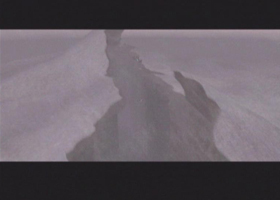 The world has been ripped open by a nameless force.

Many thousands of years ago, the Ancients’ dominion over the planet ended swiftly and viciously. The truth surrounding their downfall was all but forgotten as time passed with basic survival replacing it at the forefront of the minds of the remaining human inhabitants who had since descended to the bottom of the food chain. The Sea of Ash, a vast wasteland littered with the skeletal remains of Ancient buildings covering a stretch of land near the former nation state of Li Vis, paints a disturbing portrait of what the Ancient civilisation must have endured in the final days leading up to its ruination. The Ancient debris strewn throughout the Sea of Ash is the remnants of a once thriving Ancient city that somehow refuses to crumble into dust as if it wants to be remembered. Not surprisingly, the city’s ruins still remain active even ten thousand years after the Ancient Age mysteriously came to an end. In the third episode of Panzer Dragoon Orta called the Fallen Ground, Mobo and Orta travel through a series of underground caverns until they reach an area known by the residents of the Panzer world as the ‘Epicenter’ which Mobo himself describes as the site of an Elder war. 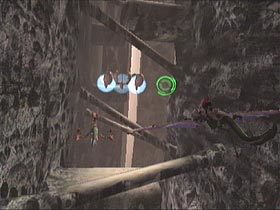 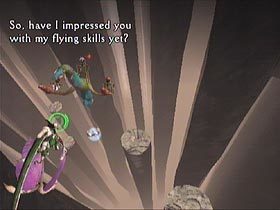 Mobo tries to earn himself a fourth wife.

The most conspicuous feature of the Epicenter within the Sea of Ash is the immense crack running along the planet’s surface which appears as if the sword of a warring god sliced it wide open with the strength of a thousand airships. Whatever caused the planet’s crust to split in two to form this ‘huge gaping hole’ is entirely a mystery, but the most plausible reason, other than two land faults shifting in opposite directions during the Great Fall, is an attack born from an ancient war or struggle centred on this area during the Ancient Age, hence the name Epicenter. One of the books in Panzer Dragoon Saga confirms that there was tension between two different groups of people in the Ancient Age, so if a war did break out it’s likely that one of those two factions were responsible for ripping the planet apart. The scar carved into the planet’s crust certainly gives the Fallen Ground all the reason it needs to adopt such a name.

As you can see from these screenshots, the gap is much more than a mere hole in the ground. The Sea of Ash is home to a series of tunnels leading to active underground ruins that house deadly defence systems, and this hole is no exception. This implies that the people who once lived here were prepared for an attack, and may have even been expecting an invasion. Mechanical-looking pure type creatures and laser defence systems attack any intruders who dare to travel into the area, which makes traveling here on foot nothing short of suicide. Why the monsters continue to guard such a ravaged region when the metropolis has been destroyed for so long is unknown. 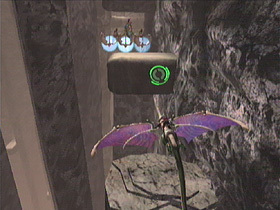 What secrets are the guardians guarding? 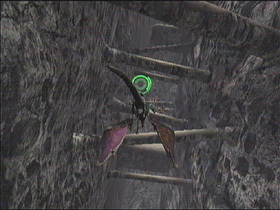 In Panzer Dragoon Zwei, the flying Tower, Shelcoof, destroyed Lundi’s village. Imagine if the area of land that would later become known as the Epicenter (of an as yet unknown destructive force) located in the Sea of Ash suffered a similar fate as the blast centre of a huge beam cannon. If Shelcoof had the power to burn a village to ashes within seconds, it or an airship like it, may have been the cause of the destruction. I can imagine the Ancients’ technology systematically annihilating the great cities and fortresses of the Ancient Age, eradicating them without hesitation. If that was what happened to the Epicenter then it makes you wonder what the Ancients’ true intentions really were for the future of humanity, if they had any control over what their creations finally did at all.