The Mystery of Dragon Crests

Throughout the Panzer Dragoon world a variety of dragon crests can be found hidden in ruins and secret locations. However the reason for their existence still remains a complete mystery. 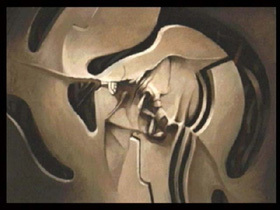 Throughout the world of Panzer Dragoon, a number of these crests have been sighted, especially to those who have paid special attention to some of the finer details within the game world. Edge described one of these, with much excitement, as “a finely crafted engraving of a dragon.” But are these Ancient circles of stone more than just carvings symbolizing the creations of the Ancient Age? I would say yes; a number of these dragon crests have made an appearance over the course of the series, and even though their presence alone provides one more unanswered question to add to the dozens of others, their numerous sightings and functions are enough to lead one to believe they have, or serve, a purpose.

The first dragon crest that the player is shown also happens to be the most famous: the crest that Lundi found inside Shelcoof at the end of Panzer Dragoon Zwei. This crest bears the designs of each of Lagi’s forms depending on the ending that the player selected. The crest that many consider to be the true one comes from the fourth epilogue of Panzer Dragoon Zwei; the ending that suggests, but does not show, Lagi emerging from his state of hibernation into the dragon we see in the original Panzer Dragoon game. A notable mention is the green light that fades over the top of the crest as the screen fades to black. It is likely that Lagi used this crest to hibernate in, as mentioned in one of the diaries of Skiad Ops Endow. 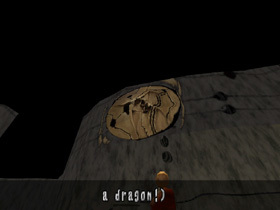 Edge beholds an engraving of the winged beast that would soon become his steed.

Panzer Dragoon Saga introduces us to several more crests. After Edge is shot near the beginning of the story, he makes his way through an underground ruin to escape to the surface world. Just before reaching the elevator in the area where players take control of Edge for the first time, there is a dragon crest high on the right hand wall (shown here) not far from where Edge finds a gun shaped like a dragon. The Heresy Dragon’s sudden appearance soon after suggests that there may have been a connection between the two. Later in the game, a dragon crest is discovered in the Genesis Chamber of Shelcoof. It is likely that this was the same crest from the ending of Panzer Dragoon Zwei. The crest houses a baby dragon who follows Edge’s dragon around like it was its parent. In the Forest of Zoah there is a secret building that can only be entered by a Light Wing class of dragon or higher. Interestingly, this building contains another crest along with a placeholder for the crest found in Shelcoof, holding the power to create the true ultimate dragon: the Solo Wing. All these hidden ruins and structures are exceedingly hard to gain entry into unless the right dragon form has been acquired, which brings up another question: did the Ancients plan for only a specific user to have access to the powers of these dragon crests? The crests could be some sort of warning left behind by the Ancients, or perhaps a symbol, like a flag, of a long forgotten empire. 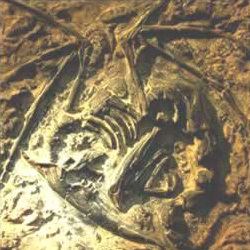 The dragon emerges from the earth like a phoenix rises from the ashes.

When the first trailer of Panzer Dragoon Orta was shown at the 2001 Tokyo Game Show, fans were given a teaser showing the dragon hatching out of what looks like a dragon crest. This “crest” never made it into the final game, and may or may not have had anything to do with the storyline at all, but it is another mystery all the same. We aren’t given any details regarding the Heresy Dragon’s whereabouts between the Great Fall and Panzer Dragoon Orta. The image here may have been shown to fans as a clue to the truth. The crest (or fossil as it looks more like to me) may not have anything to do with the story at all, however, and may just symbolise the dragon’s return to life after four years without a Panzer Dragoon game.