Was the dragon watching over the Excavation Site for one reason alone, or for a number of reasons? This article looks into the meaning behind Panzer Dragoon Saga's introduction sequence.

Edge stares up to see nothing.

While Edge gazes out into the unknown as he leans against the railing of a high scaffold above an excavation site he and his Imperial mercenary comrades were hired to guard, a winged shadow passes over him. In the time it takes to flap its wings once the creature pushes through the sky before Edge even notices something blocking out the light overhead. He looks up to see whatever had cast the shadow upon him long gone. However, we can come to the safe conclusion as to what it was we all saw: none other than the dragon himself. It makes me wonder why the stalwart dragon was there in the first place. Was his presence there a mere coincidence? I place doubt on that when we can all find a certainty or two. The dragon journeyed to the excavation site for a very good reason; you just need to pick one from the limited range of logical answers available. Azel being the key to unlocking a path to Sestren is one such reason, and the Divine Visitor holding the keys to unlocking the ancient chains that enslaved humanity to minimal population growth, or death, is another. The likeliest reason, of course, is Azel, because she was buried in the site itself. The dragon was keeping an eye on her, and perhaps for this sake, hibernated nearby.

The dragon could not have known what would happen to Azel, otherwise he would have stopped Craymen from taking her. He wouldn’t have allowed Azel, a weapon capable of awakening another weapon capable of genocide, to be taken if given a choice, unless The dragon needed Craymen to revive her from unconsciousness. The dragon did need her to realise his own goals, but that’s taking a huge risk. 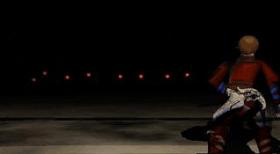 Ancient beasts lurk in the shadows. 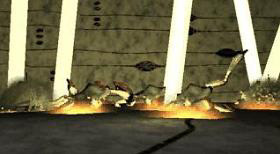 The dragon demonstrates his legendary power.

Edge, as we know, is shot by Zastava and falls into a deep chasm where he somehow survives to discover ancient ruins surrounding his every step (the “how” in the “somehow” is the Divine Visitor in my opinion). Conveniently, Edge finds an ancient laser weapon that will no doubt have many uses in the future and rides a platform lift he presumes will take him to the surface. Once it stops, dozens of red eyes gleam in the darkness shrouding the path before him. Shell plated biomonsters similar to the one he fought at the excavation site begin stepping out of the shadows in lined formations. Inconveniently, the gun refuses to operate when Edge confronts over a half dozen red-eyed armour-plated ground-based biomonsters marching towards him in perfect unison. Their sluggish steps sound like stone tapping marble. Since his back is against the verge of the lift which marks a huge fall, he cannot return to where he came from unless he wants to tempt fate again by falling another lengthy height. Something shrieks from above and spiraling white laser beams rain down upon the beasts, drilling each one into tiny pieces of charred meat and exoskeleton. Edge is, to put it succinctly, saved in the nick of time. 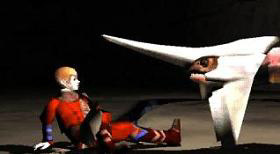 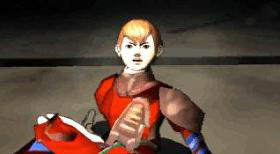 Edge is enthralled by its gaze.

Edge is surprised yet relieved by the sudden carnage, but becomes frightened by the sound and sight of something making a vertical gliding descent directly above his head like something dropping from the sky. He covers his face with his arms in a panicked attempt to protect himself as the creature closes in, in fear of being its next target. Whatever it is flies down past him, near the elevator’s rim, instead of into to him but Edge still releases a muffled cry of panic just as the creature dives. The heavy flapping of wings serve as an audible prelude to the approach of a winged beast flying up and besides the verge of the lift with graceful flaps. Without a moment’s notice, a dragon flies right in front of Edge with such silence that it startles him. Edge, who is now sitting on the floor after falling back from fright, begins to stare at the dragon with less and less fear; he is mesmerized to the point of focusing on nothing but the dragon, let alone any feelings. It lands next to Edge, similar to how it landed near a very surprised Kyle. 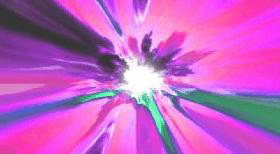 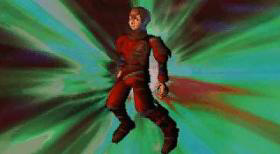 Edge is held in mid air.

Edge’s mind races through an iridescent tunnel before he finds himself floating in mid-air, just like how Kyle experienced his vision. This is significant in my Sky Rider theory. Entering the tunnel perhaps visualises two minds becoming one or a telepathic link between Edge and the dragon. The Heresy Dragon’s means of communication is, on the surface, images shown in a certain order, one after the other, to express a certain meaning. 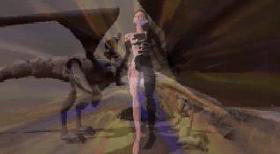 Azel and the Sky Rider. How are these two characters connected? 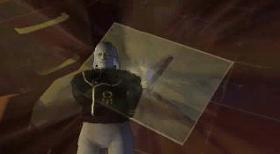 Edge does not know Craymen by name at this time, but by actions.

An image of Azel is overlapped with Kyle’s encounter with the Sky Rider, then the Sky Rider reaching out his arm from a first person perspective. Official sources have confirmed that the Sky Rider was not Lundi, yet strangely enough, Lundi is shown experiencing his vision soon afterwards. Here a Sky Rider drone theory has its strongest roots. This part of Edge’s vision could mean that Azel and the Sky Rider were both drones capable of opening up a path to Sestren, explaining the Sky Rider’s much sought after death. Now the dragon has another opportunity to enter Sestren. The question is: how did the dragon know about Azel? Was the Heresy Dragon Program who was inside the dragon and who turned him into a dragon in the first place aware of all the drones equipped to interface with a Tower? He might have been given such knowledge by the rebels who activated him and stole Azel [and the Sky Rider]. They were all (re)programmed to loosen the Ancients’ grip on the world by destroying the Towers from what we can gather. This is presumed in the case of the Sky Rider.

Somehow (a word prone to excessive use in theories) the dragon knew about Craymen and his goal of awakening the Tower of Uru. An image of the man is lapped over a picture of the Tower in question. Who needs words when images are so much more expressive? As that old saying goes, a picture is worth a thousand words. 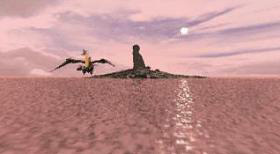 The dragon flies towards the Uru Tower in the vision, but has yet to do so in reality. 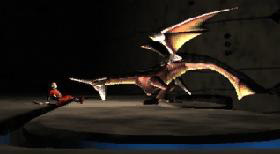 Meeting a dragon isn't an everyday occurrence for Edge.

Here Edge sees the Arm Wing flying towards the actual Tower itself. Are we seeing the future, or is the dragon giving his plans visual form, by communicating via imagery?

Edge is pulled back through the tunnel. He exits the vision to discover that his fear is nothing but a distant memory. But his darker emotions will decide what happens in the near future; recent transgressions cannot be forgotten. Edge understands that the dragon has chosen him to be his rider, and to aid him in stopping Craymen from reactivating the Tower, although Edge doesn’t know Craymen’s name yet, nor the man’s motivations. Edge’s motivation is clear, however: vengeance. In his mind, Craymen is nothing but a murderer deserving of death.