Surprisingly, there are a number of subtle differences between the various iterations of the Japanese, North American and PAL versions of Panzer Dragoon. Curious minds can read all about some of those differences here.

Note: Several of the screenshots on this page were taken with the SSF emulator.

Each of the Saturn Panzer Dragoon games exists in three different versions, which, for the purposes of this page, I’ll just be referring to as the “Japanese version”, “US version” and “PAL version”. Aside from the usual differences (such as translation from Japanese to English), there are a handful of in-game differences between the various versions of the games too, so for anyone who’s curious, this page will list them all. If any readers are completely unfamiliar with this sort of thing though, here’s a very quick summary of the general differences between the versions:

This is the version of the game that was primarily released in Japan, and it’s sometimes referred to as an NTSC-J version. In the case of the Panzer Dragoon series, all of the games were created in Japan, so these are the original versions of them.

This is the version of the game that was primarily released in North America, and it’s sometimes referred to as an NTSC-U version, or simply NTSC version. These versions of the Panzer Dragoon games are based on the Japanese originals, but of course, all of their in-game text is translated into English.

This is the version of the game that was released in Europe and other PAL territories. The PAL versions of the first two Panzer Dragoon games are “PAL optimised” to run at the correct speed and unbordered on PAL systems. The PAL version of Panzer Dragoon Saga was slowed down and bordered, in comparison to the same game running on a 60Hz NTSC television that the Japanese and US versions were designed for.

Those are the fundamental differences between the various releases of the games; without further ado, here are the other differences. 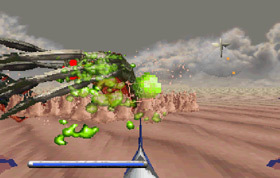 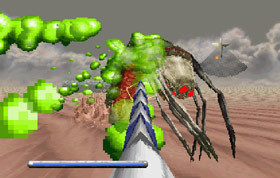 The green smile approaches the dragon

A similar alteration is the toughness of the giant sandworms. In the Japanese version, these creatures can be gunned down relatively quickly, but in the US and PAL versions, they’re so resistant to damage that it seems humanly impossible to defeat them all before they disappear. Of course, this means that it’s not possible to get a 100% shot down ratio for episode 2 in those versions of the game, so this change evidently went a bit to far.

Another episode 2 change can be seen right at the beginning of the level; as you fly towards the cave, a few groups of brown winged enemies approach from your right, some of which carry pink parasites on their backs that will fly towards you and attack you if their “host” is destroyed. In the Japanese version of the game, only the final group of brown enemies carries these parasites, but in the US and PAL versions, all three groups have them. 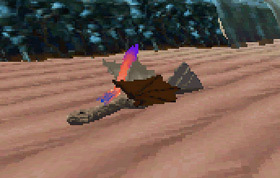 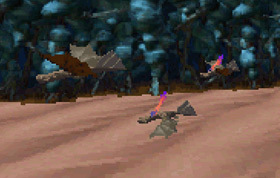 A group of parasite enemies

In the Japanese version of Panzer Dragoon, you begin a new game on the Normal difficulty setting with three credits, on the Hard setting with no credits, and on the Easy setting with unlimited credits (which is displayed as “free play”). This was altered for the US and PAL versions of the game though, as in them you start a new game on Normal with only one credit, on Hard with no credits, and on Easy with only five credits. Oddly enough, this change seems to have been overlooked for the US and PAL instruction manuals, as they still quote the numbers used in the Japanese game. 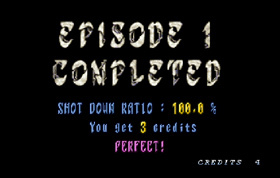 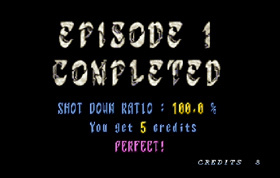 Similarly, you’re able to earn more credits when you finish a level in the Japanese version: the maximum you can get is five for a 100% shot down ratio, compared to a maximum of three credits in the US and PAL versions.

The “Wizard Mode” cheat basically makes the game play faster, but it was removed entirely from the PAL version of the game, although many European gaming magazines still published this cheat with all the others back when the game was released. It may possibly have been removed because Sega couldn’t get the ultra-fast Wizard mode looking good on slow-refresh-rate 50Hz PAL televisions.

This cheat code is actually the one for Wizard Mode. After some time, the FMV of the cloudy sky fades away and ends, but before it does, you’ll be greeted by one final message:

…referring of course to Panzer Dragoon Zwei, which Team Andromeda were already planning according to various sources from the time. Oddly enough though, this final part of the message doesn’t appear at all in the US or PAL versions of the game.

Thank you for playing "Hard Mode"

Now, you can play TEST MODE

In the US version, the congratulations message itself is a little different; it appears at the bottom of the screen rather than in the centre as the Japanese message does, and it reads as follows:

Although it’s worded differently, it still gives the same information as the Japanese message: the “Secret Mode” referred to is Wizard Mode. However, the congratulations message for the PAL version is different again:

Your skill in “Hard Mode” deserves a reward. The “Scenic Mode” is now at your disposal. Input Secret Command: L L R R [Up] [Down] [Left] [Right]

Because Wizard Mode was removed from the PAL version of the game, a different cheat had to be given, so the cheat for invincibility took its place.

When the invincibility cheat is entered in the Japanese or US versions of the game, the words “Invincible Mode” pop up on the screen, but in the PAL version the words “Scenic Mode” appear instead; it’s not really clear why this odd change was made. 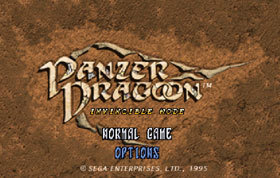 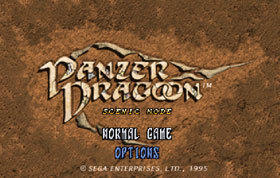 If you wait at the game’s title screen in any version of the game, a “teaser” movie will eventually start playing. In the Japanese version of the game, this movie features several lines of text in Japanese; whatever this text may say though, a translation of it doesn’t appear in the US or PAL versions.

Hidden Document on the Game Disc

If you put the Japanese game disc into your PC and have a look at what’s on it, you should find a file called README.DOC. This is a Word document containing some post-production thoughts and commentary from Team Andromeda (all in Japanese, of course), but it doesn’t appear on the US or PAL game discs.

In the US and PAL versions of Panzer Dragoon Zwei, the menu of hidden extras that you can unlock is called Pandra’s Box; the term “PanDra” is an abbreviation for “Panzer Dragoon”, and of course, it sounds quite like “Pandora”, the name of a character from Greek mythology. 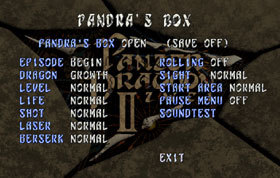 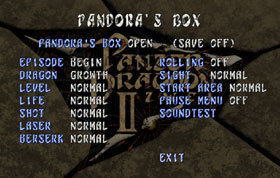 However, in the Japanese version of the game, this menu actually was called Pandora’s Box; it seems likely that its name was changed so that the whole Pandora / PanDra connection would be more obvious for English-speaking gamers. Another slight change is the title of the first episode, which was called “Starting Destiny” in the Japanese game, but was changed to “Destiny Begins” for the US and PAL versions; Panzer Dragoon Saga features numerous small examples of tidied-up or modified English, too.

Hidden Documents on the Game Disc

As with the first game, the Japanese Panzer Dragoon Zwei disc has a hidden document on it that contains some comments from Team Andromeda; this time around it’s a text document instead of a Word document, and it’s titled README.TXT. However, there are another two documents hidden on the disc for this game, called WORLD.TXT and OMAKE.TXT.

The WORLD.TXT document seems to contain a fairly detailed description of the Panzer Dragoon world, covering both general information and also the storyline of Panzer Dragoon Zwei. OMAKE.TXT describes such things as how scoring works in the game, what some of the hidden features do, and other technical gameplay-related info. Once again though, none of these documents were included on the US or PAL game discs.

HP and BP Replenishment at Save Points

Despite all the critical acclaim that Panzer Dragoon Saga has received over the years, few gamers would argue that it’s a challenging game to play and finish. It might come as a surprise to Western gamers, then, that the Japanese version of the game was even easier: whenever you accessed a save-game point in the Japanese version, your Health Points and Berserk Points would be replenished to maximum.

Graphical Glitches in the PAL version

PAL gamers will probably have noticed the small graphical errors that occur in certain cut-scenes throughout the PAL version of Panzer Dragoon Saga (cut-scenes that use in-game graphics rather than FMV). One of the most obvious glitches can be seen in the sequence where Edge comes across the Arachnoth boss at the end of the Valley area, as when he sees clouds of dust being thrown up in the distance, they seem to be emerging from a point up in the sky rather than from behind the cliffs as they’re supposed to. Numerous similar glitches occur in other cut-scenes in the PAL version, some of them so small that players would almost certainly overlook them if they didn’t know what those scenes were intended to look like.

The reason for these errors is rather odd. Instead of it being an slip-up in the PAL optimisation of the game, it turns out that the PAL version of Panzer Dragoon Saga is not actually PAL optimised: it’s essentially just the US version of the game with its region code changed. Because a PAL Saturn won’t display as many frames per second as a US Saturn, it compensates by running the game slightly slower than intended, and it’s this that causes the cut-scene errors: because of the incorrect running speed, certain graphical effects are rendered out of sync. On the other hand, if the PAL version of the game is played on a US or Japanese Saturn (with something like an Action Replay cartridge), these glitches don’t occur at all.