This review was written by the creator of a Panzer Dragoon fan site, someone who has played Yukio Futatsugi’s previous dragon combat games extensively, written and analysed that fictional world, and has built up a set of expectations about what these games entail over the last sixteen years. Consequently, my views are inevitability formed through coloured lenses, representing a Panzer Dragoon fan’s perspective and all the bias that entails. However, this review also attempts to look at Crimson Dragon independently of that legacy, and will examine whether this Xbox One title is a worthy experience separate from the Panzer Dragoon series. 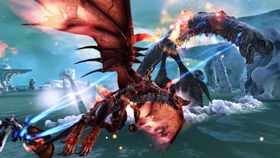 Fighting an Eel-K with the aid of a wingman dragon.

Crimson Dragon’s gameplay expands on Futatsugi’s previous rails shooters, Panzer Dragoon and Panzer Dragoon Zwei. Taking advantage of the dual analog controls that weren’t available on the Saturn, Crimson Dragon allows players to manoeuvre their dragon and aim at enemies as independent actions. In theory, and often in practice, this offers a greater degree of freedom to the player. No longer are you required to hold down a button to lock onto enemies; simply move the right analog over the enemies and press the right trigger to unleash the dragon’s lock on lasers. Unlike the Panzer Dragoon shooters where you’re confined to avoiding enemies only when facing the front, Crimson Dragon allows the player to avoid enemies approaching from any direction. These enhanced controls create a solid flow, where targeting and flying feel separate - as they should - offering a solid evolution to the Panzer Dragoon legacy.

However, the controls are far from perfect. The new freedom that Crimson Dragon offers makes the player more involved in the action, however the dragon’s floaty handling can make avoiding enemies difficult. While a solid attempt has been made at reworking the game’s original Kinect controls (which are no longer used in the new Xbox One version), Crimson Dragon’s origins as a Kinect game are still evident. The additional freedom provided by the controls can become a hinderance as you’re overwhelmed by enemies coming from all directions. 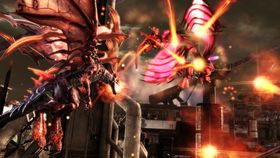 Sometimes you may feel overwhelmed by enemies.

Crimson Dragon is an old school rail shooter at heart, and the frustrating difficulty of bullet hell shooters is one aspect of the game which differentiates it from the Panzer Dragoon shooters. While completing the original Panzer Dragoon was no easy accomplishment, the amount of enemies always felt manageable, so long as you learnt the enemy pattern. In Crimson Dragon, the amount of enemy fire which you must avoid often feels overwhelming, unnecessarily so. While Crimson Dragon’s missions also require strategy, this often involves preparing with an appropriate strategy before the mission begins by equipping more appropriate skills, wingman dragons, or levelling up, rather than learning the best technique to shoot down your opponent. The strategy feels more like an RPG than a shooter in this respect, with an emphasis on grinding compared to the highly strategic battles found in Panzer Dragoon Saga.

The core progress system which Crimson Dragon is based around is an economic currency known simply as “credits”. In Crimson Dragon, nearly everything is based around the earning and spending of credits, from obtaining new dragons, skills, and wingmen to aid you in battle, to unlocking missions and acquiring revival gems. It is the revival gem system which is the most controversial aspect of Crimson Dragon’s economic system and one which I think lets the game down. Revival gems can be obtained in packs, either by paying real world money or grinding previous missions to obtain in-game credits. Most of the missions, save for the timed missions, can be completed simply by using a revival gem or two to continue if you die. This is contrary to the Panzer Dragoon shooters, where you would have to restart the episode. Completing a level would require skill, rather than money. I know which type of accomplishment I find the most admirable. Unless you’re exceptionally skilled, you’ll likely need to use a few revival gems (or restart the mission) as you progress through the game. Crimson Dragon asks you whether to use (or purchase) a revival gem when you’re at your most vulnerable: when you’ve almost completed a mission and risk losing all of your progress. 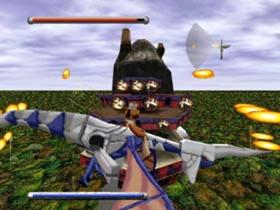 The game also requires you to spend credits to begin a mission. Generally speaking, the further you are through the game, and more difficult the mission, the more credits it will cost to play. This means that you’ll need to make an economic decision each time you start a mission. Is the cost of the mission and the revival gems that will be used to complete it worth the amount of credits and experience earned by completing it? Sometimes you may not have enough credits to start a mission and you’ll need to grind earlier missions to save up enough credits to play it. Another issue is the requirement to have obtained particular antibodies from fallen enemies in order to progress to later missions. It is not always clear which missions these rare enemies can be found on, meaning that you have to use a trial and error approach, hoping that the mission you try contains the required enemy type. These mission requirements expand the length of the game, but in an artificial way. I would much rather a shorter, less repetitive game than one which requires the player to grind in order to progress. 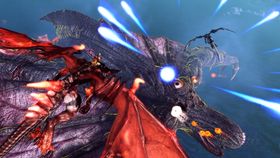 The free flight sections are of mixed quality, but some are of epic proportions.

While on the subject of bosses, I should mention Crimson Dragon’s free flight mode. Although some boss fights take place on-rails, there are a few which give the player the ability to control the dragon in “free flight mode”. This is not quite what it sounds like; it does not give the player full control over the dragon’s movement. The dragon continues to fly forward automatically, but players can accelerate and decelerate the speed of the dragon, as well as guide the dragon’s path up, down, left, or right. The free flight controls unfortunately feel sluggish and it can be even more difficult to see where enemies are coming from than in on-rails mode. This mode does provide the occasional epic battle, such as one boss fight where you have to defeat a huge dragon larger than anything in the Panzer Dragoon series by flying around its hulking mass to find weak points. More often than not, however, the free flight sections consist of flying around defeating groups of smaller enemies, and this can feel repetitive. I see this free flight mode as something which could greatly move the series forward in a future instalment, but the execution of it in Crimson Dragon feels like wasted potential. 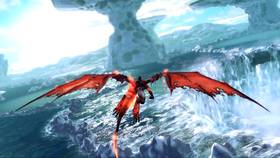 Some of Crimson Dragon's environments are truly breathtaking. 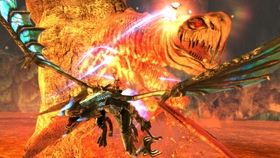 The world is brighter and has a more gamey feel to it than Panzer Dragoon.

Crimson Dragon’s visuals are one area where the game really shines. Although it is evident that game was designed with the Xbox 360 hardware in mind, the art design of the environments more than makes up for the less than next generation visuals. There is diversity here, with beautiful lake and forest outdoor areas offset by underground passages and ancient ruins. Draco is a different world from the wastelands of Panzer Dragoon, a world that feels brighter and more alive than its spiritual ancestor. If you’re coming to the series expecting a world that feels like it belongs to the same universe, that dark world of deserts and lonesome ruins we Panzer Dragoon fans have come to love, you will be disappointed. But if you come expecting a world with notable similarities but that is also its own universe, Draco’s setting has much to offer. Personally, Draco will never replace the Panzer Dragoon world for me, but I see it as complementary, a universe which acknowledges its heritage but does not attempt to replicate it.

Some visual aspects I didn’t like though. In some missions, yellow collectable beacons are placed throughout the environment which you can collect to get a better score at the end of the level. Objects in the Saturn Panzer Dragoon games, such as the ancient obelisks scattered throughout Panzer Dragoon Saga’s explorable areas, always felt like they belonged in that world. The yellow beacons in Crimson Dragon feel too much like a video game collectible (such as rings in Sonic the Hedgehog) rather than an aspect of the game’s fictional setting. Furthermore, some enemies are highlighted in bright colours when they are attacked. These gamey aspects of Crimson Dragon’s world make it harder to suspend disbelief. 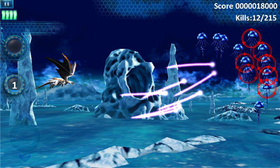 It's hard to believe that this simple game has a better soundtrack than Crimson Dragon.

The audio too takes on a different, more orchestral tone, than Panzer Dragoon’s more tribal sounds. Unfortunately the Panzerish music featured in the mobile spin off, Crimson Dragon: Side Story, has been altered for the main instalment of the Crimson Dragon series. There is less of Saori Kobayashi’s distinct style in the soundtrack now and more of the mainstream style provided by Pyramind Studios. Although the soundtrack is still beautiful, it feels more generic and loses some of it’s aesthetic charm because of that.

The story is another area where the game suffers. Like Side Story, the tale is mostly told via text with static artwork in the background, although Crimson Dragon also includes voice acting, in-game dialogue, simple hologram messages to the player, and the occasional cut scene. The English voice acting can sound jarring, especially if you’re used to the beautiful Panzerese (and Japanese) dialogue of the Panzer Dragoon series; it took me out of otherwise alien world of Draco. 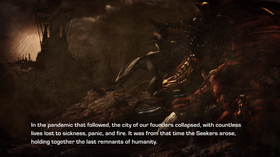 Much of Crimson Dragon's story is narrated by the protagonist while the player is presented with static images.

Another issue is that most of the story comes in the form of characters giving you mission objectives, rather than interactions between characters. By the end of the game, I didn’t care for any of the characters. Contrast this with Panzer Dragoon Zwei where even though the story was minimalistic, the interactions between Lagi and Lundi still made the ending consequential. Crimson Dragon’s plot twist at the end of the comes out of nowhere, feels disconnected from the rest of the story, and ultimately the fate of the characters which follows from the ending just left me feeling indifferent. Where Crimson Dragon’s story does excel is in the small details, the clues about the nature of this alien world that are hinted at through the mission descriptions. Like the Panzer Dragoon games, you will come away from the story with lots of questions rather than answers; I see this is part of charm of both the Panzer Dragoon and Crimson Dragon stories. Like the Panzer Dragoon shooters, the story is hinted at being part of a larger saga (Futatsugi also wants to make a Crimson Dragoon RPG), something that has the potential to also be grand, yet as a standalone story Crimson Dragon isn’t fulfilling.

Crimson Dragon is not officially a successor to the Panzer Dragoon series, yet inevitably that comparison will be made. Even when taking into consideration the low budget nature of the game, Crimson Dragon fails to live up to the legacy of it’s spiritual predecessor. Overall, it feels more generic and less polished. As a standalone game, Crimson Dragon still has a lot of offer however, and remains unique among a sea of more mainstream shooters. As such, I still recommend the game to any fan of the genre who has an Xbox One. As for whether it’s worth the currently hefty price of the console, that is much harder to justify. My advice is to wait until more Xbox One titles are available and the price of the console has dropped. On modern consoles, rail shooters of this kind are few and far between, and despite the mentioned issues, Crimson Dragon is a flawed but worthy modern addition to the genre.