For any Panzer Dragoon fan, no matter how mediocre or non-outstanding the retelling of Panzer Dragoon in the form of this animation may seem, it’s at least worth watching once. I felt that the music was worthy of some appreciation because the anime mostly uses a remix of the main theme from the intro of the original game which also finds its way into the “Empire” track in episode 3. I am going to write in a way that is as relaxed as possible just to keep things flowing fluidly, so hopefully I don’t bore you all to death, but I couldn’t help wondering how I’d see the Panzer Dragoon anime from my own clouded perspective, because it is impossible for me to stay entirely objective here, try as I might.

The OVA elaborates on the original story to some extent but changes a few things in the process. 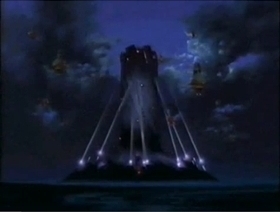 The Empire discovers an ancient Tower.

Where to begin? At the beginning of course. Here we see Kyle injected with an almost fatal dose of personality in how perhaps having none at all left more to the imagination. The game almost leaves you with the impression that he was the strong silent type by impressing no trace of character on players at all other than sheer stubbornness anyway, but here it’s a whole new story. And who in his or her right mind can’t appreciate spiky hair? It actually does make him look a bit more human as strange as that may sound whereas before his hat made him seem more deliberately less exposed. Like a flare lighting up the night sky, the sharpness just emits the kind of phallic manliness that no woman can resist.

As you can see, my envy knows no bounds; I wanna be just like Kyle when I grow up. No but seriously, here Kyle seems to be the archetypal hero filled to overflowing fullness with a rare kind of enviable nobility. He even tries to stop the Blue Dragon from shooting down the Imperial fleet. It seems that unlike the Ancients, Kyle remembers that there are actual people on board. As things stand, all you need to know about Kyle is that he’s just a good old fashioned good guy in a world that seems it could do with more people like him. Need I say more? 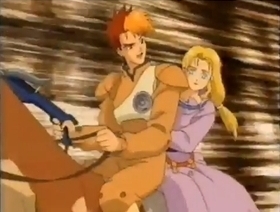 Kyle and Alita ride on the back of a coolia.

Now, assuming you have played the original game, you know the drill. Kyle and his friends suffer the misfortune of stumbling over two dragons firing laser beams at one another, and are caught in the crossfire by accident. Lady luck decided that it was their turn to pay for not worshiping her, or in other words, this hunter cursed with nobility just happened to be in the right place at the right time to save the day. Here, however, Kyle’s motivations for chasing the darker dragon in the story morph from sheer persistence (refusing to give up is one of my own failings as a human being too) and a sense of obligation to help the dragon hero of the day finish what he started into both of those things with the added flavour of a natural desire to save his lovely female companion named Alita, thrown into the mix, who since being blind, couldn’t be more helpless.

Even if she is invented out of nowhere to make the game-to-anime adaptation more appetising, who can say no to rescuing the damsel in distress anyway? Certainly not me.

As a long time fan of this series, what stood out the most to me here was how much less robotic and more more feral the dragons were, which isn’t a bad thing. Not at all in fact because it brings them that much more to life, or so it seems; they do breathe laser beams after all. What was strange about the anime though was of course when the evil dark darker-than-light dragon (as if that wasn’t contrasting enough to advertise his darkness to the world) decided to abduct Kyle’s sweetheart and actually use her as a rider by merging with her mind. That’s something I felt the need to zoom in on with a scope a bit, because unlike the game, the dark(er) dragon doesn’t begin with a rider of his own no doubt to make room for a more romantic adventure. 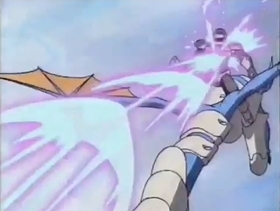 What does that tell you? It naturally suggests/implies, however you want to look at it, that these particular dragons and humans are incomplete without each another. And as always, I was looking at this as less of a critic and more as a fan. Anyone seeing through the lens of rugged individualism may be offended by the mere thought of becoming one with anything. I can hear my pride saying no thank you already. But keep in mind that it never necessarily precluded individuality anyway; we are all connected like domino bricks falling on each other like ripples rippling across time into infinity and beyond. Here’s where I stop myself from wondering where that will all lead; I wouldn’t want to get too lost in all the myriad of possibilities.

The highlights for me, personally, were the Imperial fleet being blown into tiny bits again like you or I were tearing the wings off of an insect in their exploration of a monolithic tower born from the “old world” (I love what that term implies - that we have forgotten even ourselves), which still stands today, and thus couldn’t help making everyone curious how. Even now I wonder if we do indeed need to be saved from our own curiosity, but then what would that make us? Who would we be without it to lend us a sense of identity through its direction? 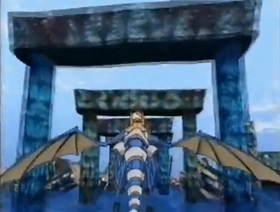 Here we see the same eroded archways found in episode 1 of Panzer Dragoon.

Also worth (never) mentioning is the Blue Dragon’s booming voice acting (obviously because he almost never speaks in the games) which is thankfully only telepathic (an actual talking dragon would make me want to wipe this from the face of existence), and uncompromising nobility in saving Kyle and Alita at the end by shielding them from the Tower’s explosive destruction, and last but not least, how Kyle always pronounces Alita “Aleeeeeeeeeeeta”.

Yeah I thought that might grate on someone’s nerves. Anyway, I liked the art direction of the blimp-like warships, even if we don’t actually see them for long because they are too busy being blown out of the sky in seconds, and how the anime even pays tribute to the game by putting the camera behind the dragon to create the third person view fans would be familiar with whilst he and his new rider are flying through the stone archways seen in/straight out of episode 1 with curious wondering and wandering eyes. 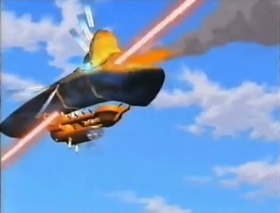 An imperial warship meets its maker.

The worst part for me was that the Sky Rider dies at the beginning so fast that we barely catch a glimpse of him, then as if through an accelerated heat process, is quickly reduced to ash for the winds to sweep away like history not deserving enough to be remembered. That’s a shame. What’s worse is how the dragon nods in agreement and somehow – someone tell me how – ended up with the name Blau. Now that is something best left floating down the river Styx.

Of course, the OVA (original video animation) itself is not exactly memorable. It ends up at the point where if you weren’t a fan, it would barely stand out in your memory at all. High demands to tailor to popular tastes are such that in the time it takes for your heart to beat once the world will forget it ever happened. The real icing on the iceberg is Kyle’s Super Saiyan transformation at the end when he merges consciousness with Blau, but then in a world of laser breathing talking dragons, human beings shooting laser beams out of their hands isn’t exactly an apple falling far from the tree.

Good riddance to bad rubbish? I’ll let you decide. At least my eyes cannot say no to seeing the art direction of those beautiful flying ships again. Can a war machine really qualify as a work of art? I can only answer my own question with a curious yes.