Was the Dark Rider a Replacement?

The Sky Rider and the Dark Dragon's rider share many similarities. A coincidence? Could the Dark Rider have been a replacement for the Sky Rider, activated after the dragon rebelled against the will of the Ancients? 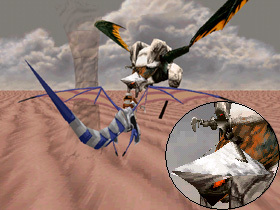 As we can see, the drone riding the Dark Dragon is the equal and opposite of the Sky Rider right down to the gun he wields.

Both the drone riding the Dark Dragon and the Sky Rider drone in his boney white armour blend with their respective dragons as if they were built for one another (you could even say their armour blends with their dragons like camouflage). The Dark Dragon’s drone rider wears the exact same type of armour as the Sky Rider, only darkened, and in Panzer Dragoon’s introduction cinematic, the dark drone’s eyes beam with white light, which makes you wonder if his eyes are mechanical in nature.

These minor differences aside, haven’t you ever wondered why the drone riding the Dark Dragon seems identical to the Sky Rider? They even wield identical guns. Now, apart from the obvious association of black with evil and white with good (the underlying theme here being the good Sky Rider in his white armour versus the evil Dark Dragon rider in his black armour), there is much more to the story of the two contrasting drones than meets the eye.

When the Dark Dragon is defeated it flies so close to the Blue Dragon and Kyle that we can peer at the dark drone’s general appearance. In case no one has noticed, the in-game dark drone riding the equally sinister Dark Dragon shares the same glowing red eyes as his steed (the dark drone’s glowing red eyes are more visible to the naked eye when he moves closer to the camera). Team Andromeda went to great lengths to portray the dark drone and the black dragon it controls as inseparable entities. The Dark Dragon is in fact a Solo Wing dragon in its Type 02 spiritual form, relying more on highly-charged berserk attacks as the mainstay of its firepower than conventional arrows of light to dispatch its foes. The armoured Blue Dragon in Panzer Dragoon, who I believe was Lagi, was also a Solo Wing dragon but in its Type 01 basic form. So, we have two Solo Wing dragons ridden by two riders who are so similar it’s uncanny fighting each other in order to decide the fate of one particular Tower. This reminds of the time in Panzer Dragoon’s history when two identical dragons albeit gold and black fought one another inside Sestren space for control of the domain. 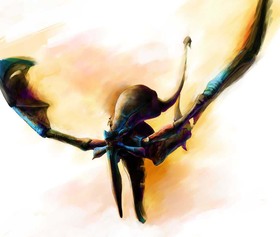 Was Atolm the guardian of the Tower of Uru?

As we know, the Tower of Uru in Panzer Dragoon Saga had no guardian dragon even though a dragon is supposed to be posted at every Tower to guard it against all threats. The theory that Atolm and Azel may have been the Uru Tower’s guardians before Azel was stolen (Atolm presumably along with her) from those who created her, and later turned against the Tower, has crossed my mind more than a few times as one of perhaps many logical explanations for this nagging mystery. If they were originally created to guard the Tower of Uru from intruders and interface with the Tower itself, it could be the very reason why unknown attackers stole Azel specifically from the genetic engineering labs of Uru while leaving many other drones behind. It would explain why the Uru Tower’s guardian dragon was suspiciously absent and why Azel in particular was stolen in the first place. What better weapon is there to destroy a Tower than a drone created to control it?

I believe the Sky Rider was one of the only drones who was stolen from its creators by an enemy faction in the Ancient Age, because like Azel, he too was created to control a Tower – the Tower outside of the Imperial capital. The drone riding the Dark Dragon was the Sky Rider’s replacement, which is why he looks almost identical to him, and why the Dark Dragon and his rider did everything in their power to kill the drone before flying to the Tower itself. Drones intelligent enough to control complex technologies such as Towers were a rare breed, but that doesn’t mean the Sky Rider and the dark drone weren’t molded from the same drone template in the same drone production facility. The ancient rebels referred to in the ancient logs found in the Uru labs where Azel was stolen from her original masters and the diary of Skiad Ops Endow probably only stole drones capable of controlling the Towers they sought to destroy. If they could simply create drones capable of interfacing with Towers, then they wouldn’t need to resort to stealing them. Even if the people who opposed the Towers Skiad Ops Endow described (a description more aptly shortened to rebels) could create their own drones, such drones wouldn’t necessarily be compatible with the Ancients’ technology, like one of the Ancients’ drones would be. Stealing drones was the rebels’ only option.

The Towers’ creators feared these rebels so much that they bred bio-weapons to guard their creations from whatever futuristic arsenal of weapons their enemies could potentially bring to bear against the Towers, their own reprogrammed drones among them. Azel may not have been replaced in time before the Ancient civilisation collapsed under its own weight… unless Azel has an evil twin we haven’t met yet.