Here we take a look at the possibility of Radgam and Kyle being one and the same person, and thus tie up the loose end of Kyle's disappearance. 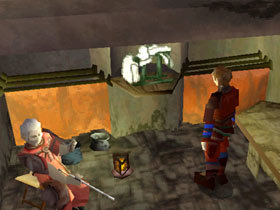 Hanging on Radgam's wall is an Ancient Age weapon, but he never reveals where he found it.

When Edge finds the town of Zoah in Panzer Dragoon Saga, he meets an aging hunter by the name of Radgam who recognizes Edge as a fellow hunter (presumably by Edge’s posture). In Radgam’s house sits an Ancient Age weapon which has long since been drained of power, and you cannot help being curious as to how he came into possession of such a rare weapon. It’s not as if you just trip over one of these weapons everyday in this world, otherwise everyone would have one and put the Empire out of business. There’s no denying that these weapons are a rare sight to behold. If you keep pressing the issue, Radgam reveals to you that it is a shrine to his fallen comrades with whom he’d fought many battles, but who were all torn to pieces by monsters in an ambush, leaving only him and one other alive to tell the tale. It leaves you wondering who the other one who survived was, but Radgam tells you to forget about him.

The other one of the two survivors is later revealed to be Aldo who speaks of a time when he was a hunter himself and now considers himself a coward for running away and wanting to live a quiet life in Zoah where it was safe.

In any case, it sounds like Radgam lived a dangerous life on the edge a lot. Sound familiar? After the events of Panzer Dragoon, I don’t exactly see Kyle giving up his chosen profession somehow. Reading Radgam’s text made me even more convinced that he was indeed Kyle as an old man, but it’s still not enough to jump to that conclusion for anyone looking to connect the dots. 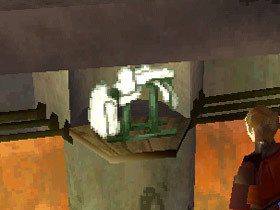 Edge, who can't help being curious, takes a closer look.

The gun looks somewhat (I wouldn’t say remarkably) similar to the one Kyle wielded in the original Panzer Dragoon which took place three decades earlier. They may not look exactly the same, but a lower polygon count and changes made to the weapon itself over the years may account for any differences we see. It is therefore possible that Kyle could still be alive, albeit older because Kyle himself wasn’t much older than a teenager when the events of Panzer Dragoon took place. When considering the probable low life expectancy of people in this bleak world filled with predators born in the past that have come back to haunt the present, you’d have to be pretty damned experienced to survive at all, let alone/nevermind for a lengthy period of time.

Radgam tells Edge how he wants to die like a hunter as opposed to rotting away into old age. Now here is the really truly strange part: Edge can later find Radgam’s corpse at the Excavation site which was quite an unreachable distance away from Zoah for any land traveller.

It raises the question: did the dragon give his old friend a lift while Edge wasn’t looking? It has to make you wonder at least. How Radgam ended up there on his own is just another one of life’s many mysteries. In the end all we can do is try to clarify the unclear. Truth be told, no one knows except for the makers themselves.

When you inspect Radgam’s lifeless body, you find that his back is broken and it seems that he’s been drained of his blood. You have to pry the gun from his cold dead hand, because even in death he refuses to loosen his grip and let go of the one thing that defined him in life. Edge makes a mental note to himself that Radgam died a hunter’s death, and rightfully so; he died fighting, not asleep in his bed as an old man. But of course, even this is still not quite solid enough evidence to constitute proof that he was indeed Kyle.

I’d like to imagine that Radgam was Kyle because even if it’s not the truth, it would be a fitting fate for him to not allow himself to die of old age, and it would tie up another loose end. Not to mention it’s fun speculation, nevermind if it’s based on a tenuous shaky foundation at best. We can either believe this or never know and leave it to our imagination. That’s up to you to decide.