Materialisation Out of Thin Air?

Who knows where Orta's gun originated, if anywhere? The questionable origins of the gun merit attention and certainly don't deserve to be discounted as something that wasn't intentional when so much detail was poured into Panzer Dragoon Orta. 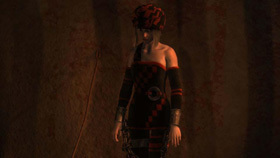 Orta has been kept in chains her entire life.

All her life Orta has only known imprisonment and the cold shackles that bond her to isolation. The Seekers of Yelico Valley keep her locked away out of sight in the hopes of one day using her for war. Helpless in her prison of stone, Orta has grown bitter and resentful towards her captors who she fails to understand. How could she, a mere child, possibly serve to further their goals? Of course, she’ll later discover that she isn’t quite human, only half human. The other half of her and side of her we have yet to see, is inherited from her mother who was not born but created. Orta is the living product of a human father and a drone mother. The fact that drones are a bio-engineered slave race incapable of reproduction means Orta’s very existence a veritable mystery.

The Seekers perhaps knew the truth behind Orta’s creation (the purpose Azel had in mind for Orta when she created her) which frightened them into keeping her imprisoned, yet this seems pointless to me when they could simply kill her to ensure that the purpose she was engineered to fulfill never was. Unless the Seekers perceived Orta as a very useful tool indeed, one worth guarding until the time was right, which they did apparently according to Orta herself when she tells us in her own words during the cutscene in the third episode:

They were all afraid of me… They said that I was the harbinger of destruction… I was chained in a cage and told that I would stay there until I was needed for war… I have no family… no friends. I am alone in this world!!

So in fact it seems that they may not have known why she was created and what purpose her creator had in mind. They simply didn’t know, but at the same time, that didn’t stop the Seekers from fearing her. 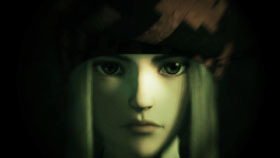 What did little more than a child do to deserve such punishment?

However, the Seekers never regarded her as a person, shedding some light on the reasons for her poor treatment. They saw drones as nothing but soulless minions of the Ancients whose sole purpose in life was to wage war, so it’s understandable that they would air on the side of caution. When drones work for an ancient race who want to see your race exterminated, would you take any risks? Drones are considered to be monsters in human form, so their reaction shouldn’t be unexpected. The Seekers may have noble goals, and the ends may justify the means (isolating and using Orta) depending on what those ends are. I wonder if Orta will ever find out what the Seekers had in store for her. Perhaps like all drones, she is nothing more than a weapon after all. 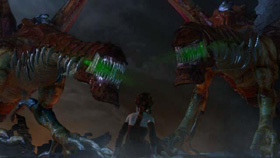 Orta comes face to face with the invading Imperial dragonmares. 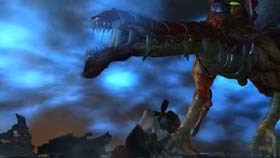 Blue white light beams quickly dispose of them however.

The Empire launches an attack against the Seeker stronghold located in Yelico Valley with its newly crafted dragonmares that have helped the Empire conquer most of the continent with next to no resistance. Thought to be unstoppable, they quickly tear Yelico Valley apart. The stone tower in which Orta is kept is blasted wide open and she soon faces these fearsome beasts herself. Their salivating mouths glow with an eerily familiar green light that succeeds in captivating Orta. Then suddenly the Heresy Dragon enters the picture soon showing them what a real dragon is made of: his arrows of light blast the dragonmares out of the way with unstoppable force. 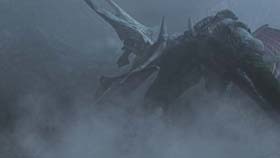 Lagi comes to the rescue.

The point of this article is to highlight the various fan explanations for the almost magical appearance of Orta’s gun. We don’t see how Orta breaks out of her chains but the carnage all around her can account for that (some rubble could theoretically break those chains, or the dragon himself could’ve sunk his teeth into them when the camera wasn’t looking). What we also don’t see is where Orta obtains her gun. Its origins are unknown. As shown by the image here, Orta isn’t carrying the weapon when she’s clinging to the back of the dragon, so she could not have taken it from the tower (having a weapon of immense and almost unimaginable destructive capability isn’t likely to be hanging on the wall of a prison anyway). As the dragon rider pair make their escape she’s suddenly missing her hat and donning a scarf (I suppose it’s possible that the hat is a scarf Orta is capable of somehow unrolling in the time it takes to blink an eye while clinging to the back of the said dragon). The moment we take control of the dragon rider pair Orta is wielding the gun in question without any prior notice. 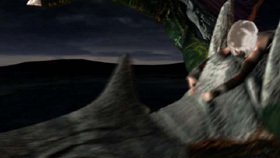 Orta escapes by holding onto the back of her dragon saviour.

So where did she find the gun? It seems as if we’ve skipped a moment in time, a brief period of time only our imaginations can replay, thereby providing a logical answer. There are two missing scenes in this sequence of events we’re supposed to picture in our minds: first Orta breaks out of her chains without us noticing, then she somehow acquires the gun when no one is watching. These are two very clear time gaps. How else can we explain where the gun came from? The gun didn’t just materialise out of thin air, surely? Explanations range from the dragon’s arrows of light unearthing it from Yelico Valley, a reputed Seeker stronghold which by rule always tend to be excavation sites as well, to Smilebit simply forgetting to write something to account for its discovery. Some fans go as far as to believe Smilebit didn’t think an explanation was even necessary! I believe Smilebit has left this mystery for fans to unravel by consciously not adding an explanation. Thus staying true to the legacy of Team Andromeda who loved constructing mysteries and leaving vague clues for us to find (K.F. Craymen having the same initials and same age as Kyle Fluge was no accident). The only other theory is that the Heresy Dragon brought the gun with him, for he may have been well-aware of the role Orta was meant to play in the future (if any). You have to ask why he was watching her at all. Though loyalty to Edge could be one reason, he may have wanted to protect her for his own reasons. 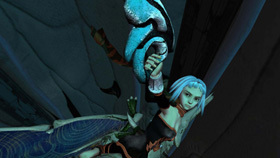 I couldn't write about the gun without adding an image of the gun itself, now could I?

Orta’s gun bears a combination of colors that any Panzer Dragoon fan should be able to recognise. If you compare the gun to the Sky Rider or Azel you will soon be hit by the swift realisation that they all share the same colors. I’m guessing it is a drone weapon directly connected to Orta, but your guess is as good as mine.

The gun’s boney-white appearance suggests that it is the exact same type of shell-like bio-technology used to literally build drones and other ancient technology. It all seems to be born from the same birthing process, or perhaps I should say molded from the same template. That’s only if we judge based on appearances; we never actually found out that the Ancients’ technology was all bio-technical until Imperial scientists studied it under a magnifying lens in Panzer Dragoon Orta. Therefore, it’s not wild speculation to imagine that Orta’s gun was literally grown. It’s a perfectly believable theory that we should consider because it’s more than possible given what we know. That might explain where it came from when it seemed to come out of nowhere.