Shelcoof destroys Lundi's village and then disappears. But where was it heading towards? Geographic evidence points towards the direction of the Tower of Uru. 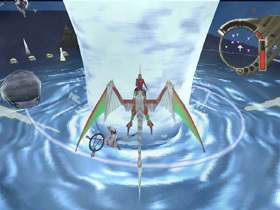 A tornado conceals an ancient airship.

Shelcoof was an ancient skyship built to fulfill the role of a Tower (i.e. mass produce armies of bio-weapons), hence why Lundi described it as a Tower of the sky. Being airborne gave the flying Tower all the mobility of a ship, and as such, was the perfect weapon the AI controlling Sestren could send to hunt down the Heresy Dragon after it had escaped from its domain. The Sestren AI activated Shelcoof to pursue the Heresy Dragon, which the AI saw as an impurity or virus invading its system, after the dragon had manifested itself in a small village along the Frontier called Elpis in the form of a mutant coolia which had grown a pair of wings. Shelcoof wasted no time hunting down its newfound prey and destroyed the village along with everyone in it with a vertical beam laser. Shelcoof’s bio-mechanical minions left a trail of Imperial warships devastated in its wake along a flightpath that took the ship to the salty shores of a place that we would later come to know as Georgius where Lundi and the dragon he raised sunk the ship over the skies above in revenge for burning his village to the ground. Decades later, Edge beholds the skyship floating over a graveyard of ancient debris in the general vicinity of Georgius. 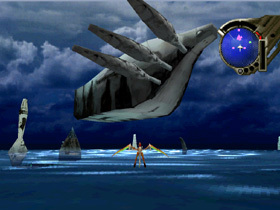 The remnants of Shelcoof uses all of its remaining power to keep afloat.

The mystery is: why did Shelcoof fly towards and eventually to an area so close to the Tower of Uru, especially when its mission had not been completed? No one knows for sure; all we know is that the ship ended up too close to the Tower to be a coincidence. The first thing that comes to mind is that Shelcoof was perhaps sent to guard the other nearby Tower from intruders. Maybe the Seekers were too close for comfort.

When Lundi sunk Shelcoof with the help of the Heresy Dragon, the ship fell from the sky, bending itself on top of and around the rocky landscape below to the point of splitting in two. The ship was all but dead by the end of Panzer Dragoon Zwei and yet the front half of the ship somehow managed to regain enough power to float above Georgius forty eight years later. It would seem that Lundi hadn’t quite sealed the ship’s fate.

The Panzer Dragoon Zwei endings show us the shipwreck resting on an actual landscape, but by the time the events of Panzer Dragoon Saga take place the ship resides over a waterscape. Whether the Tower of Uru raised the water level near the Uru ruins for the purpose of protecting the ship until it could regain its power, or whether this was a natural flooding is unknown. Either way, Shelcoof took to the skies once again, and it was being shielded from the outside world by a tornado created by a small army of biomechanical sentries circling around it. Edge can finally put the towering skyship to rest once and for all by blowing up the ship’s remaining sails to sink it permanently once his dragon’s laser ranks reach full power.

Edge may have brought the story of Shelcoof to an end, but was this ship the only one?