Could the Dragon Be a Gun Producing Factory?

More speculation about the origins of Orta's gun. In this article, KBlack discusses the possibility that the dragon's body itself may have been designed to create other types of biological weapons, such as the gun.

This article comes as a complementary explanation to Solo Wing’s theory, which discusses the origin of Orta’s gun. According to the Wedged Gun Theory, the only point that remains obscure is the fact that the dragon couldn’t have put the gun himself on his own back.

I don’t think anyone would have put such a powerful weapon somewhere only in order for someone else to use it. Apart from Azel, who could have goals that we cannot understand, no one could have got close enough to the rider without being torn to shreds or being chosen by the dragon itself to be its rider, in which circumstances he would have needed the gun himself…

I don’t know the principle of working of those “dragon pistols” every rider in the series have, but there may be two possibilities: the pistol could be a kind of plasma rifle developed by the Ancients OR it could be a small, hand-held version of a bio-luminary oscillator. The second theory is interesting because it opens the possibility for the gun to be a kind of pure-type monster engineered by the Ancients, which couldn’t reproduce, but could be produced by some kind of factory. 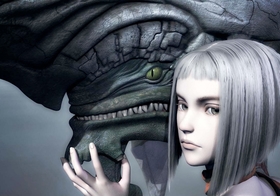 The dragon's armour shares many similarites with the texture of Orta's gun.

Let’s see it this way: it seems like a stylish concern to make Orta’s gun match perfectly the color and texture of the dragon’s bio-armor plates, doesn’t it? So, and here is the core of the theory: maybe the dragon himself was the “factory” to make guns for his riders. The dragon visibly evolved since it’s first appearance in Panzer Dragoon Zwei. He even morphs at will in a nanosecond in Panzer Dragoon Orta. Also, in the end of Panzer Dragoon Orta, the dragon spawns a heir, which includes creating a potentially complete bio-engineered creature and… a bio-luminary oscillator! So, maybe was it a part of the dragon’s armor that just morphed in a pure-type creature being a dragon pistol, seeing how the dragon has the ability to create a creature as complex as himself. Maybe even the dragon was making pistols since the beginning, maybe Lundi’s gun itself was a creation of our beloved dragon, and the fact that Orta’s gun doesn’t look like any other model in the series is a proof of how the dragon’s pistol-making abilities evolves just like every other ability he has. It’s also worth mentioning that Orta’s gun changes form when Lagi changes between base, heavy, glide wing forms throughout the game, further shedding light on the fact that the gun was indeed linked to the dragon itself.

From that point of view, it would seem logical that the piece of armor that was most likely to morph was the one on the dragon’s back, near the rider’s hand, as the Ancients wanted their weapons to be as efficient as possible.