This article puts a magnifying lens on the Sky Rider as seen in the original video animation (OVA). 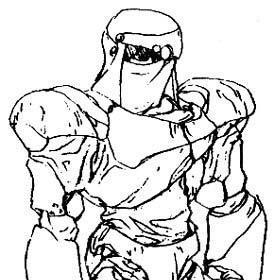 Here we see a drawing of the Sky Rider as seen in the OVA.

Oh how I wanted the second dragon rider to be Lundi (or first if you consider that Panzer Dragoon was the original game, and not the later prequel). His life was the spark that lit the fuse. Why did he have to discharge a helix of inhuman green energy? Green lifeforce escaped his body as if it had been trapped there and was waiting to break free all along. Why couldn’t that energy spiraling out of him have been a soul? I write that as a joke of course because in the world of Panzer Dragoon, all there is, is a naked physical world, with everything around it and everything beneath the surface being seemingly nothing but a material extension of it in one form or another. I wouldn’t expect souls to exist in the Panzer world as anything other than a metaphor or highly evolved state of being where the material only seems immaterial because it can reorganize its atoms and shrink to pass through matter. Because when we see things we want to see, they are often not what we want them to be. So face reality. Then the seemingly supernatural becomes another form of natural.

As it stands, human-looking instead of human is probably the best way to describe the Sky Rider himself. What I would like to point out, or I should say, highlight with a bold highlighter, is that the Sky Rider seen in the anime seems to be a lot more human than he does in the game. I want to put a spotlight on that and how he seems a lot more natural. His clothes are thinner and way more nomadic in appearance for a start, and thus, he looks way less rigid and less robotic overall.

It’s a shame that we only catch a glimpse of the Sky Rider here too. Even his concept art (seen here) is more revealing than the anime. I just cannot help wondering: who was he? Ultimately as sad as it may be, he’s just another one of many unsung heroes who should be remembered for the sake of never forgetting those whom should never be forgotten. If I were a wandering desert warrior, I’d look like him too. Minus the whole being shot through the chest with a laser beam part, naturally of course. Nevertheless, when looking back maybe that was a small price to pay to save the world. Nothing changes the fact that by being one domino falling on another, in his own way, he did.