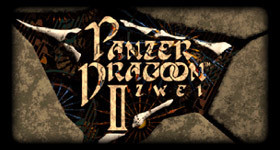 Panzer Dragoon II Zwei is the sequel (or in the storyline, the prequel) to Panzer Dragoon, and it was released roughly a year after that first game. It was released exclusively on the Sega Saturn. Panzer Dragoon II Zwei is commonly referred to as simply Panzer Dragoon Zwei. A literal English translation from German would otherwise require the title to spelled out as Panzer Dragoon Two Two; it is likely that the Roman numerals ‘II’ were placed in the logo to assist in understanding, rather than being an addition to the game’s title. Panzer Dragoon Zwei’s gameplay follows firmly in the footsteps of its predecessor, once again utilising the rail shooter genre to immerse the player in a vivid world of surreal aerial combat. This time around, the Panzer Dragoon series added several new features to the existing gameplay formula, features that gave Panzer Dragoon Zwei’s gameplay greater diversity, including alternate routes through the levels, a dragon that evolved into different forms depending on the player’s success, a new “berserk” attack, and a number of unlockable features accessible from a section in the options screen called “Pandra’s Box”.

The plot of Panzer Dragoon Zwei takes players back twenty years before the first Panzer Dragoon game took place; its main character is a boy named Lundi, who had lived all his life in a small village out in the endless wastelands of the world. Lundi raised a dragon - which he named Lagi - from birth, protecting him and hiding him away from the superstitious people of his village, who would have put Lagi to death had they discovered his existence. When Lundi’s village is obliterated by an immense battleship from the Ancient Age, Lundi found that he and Lagi are the only survivors; riding atop Lagi’s back, Lundi set out in search of vengeance.