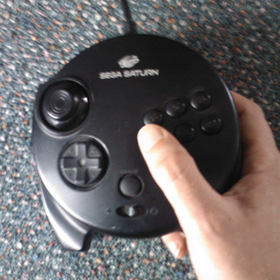 In Panzer Dragoon Saga, the Divine Visitor first influenced the Panzer Dragoon world after that game’s introduction in which Edge had been shot for dead by Zastava. A white orb hovered against an orange background, the same texture as Sestren. Players are required to enter the name of “the one who controls Edge”. The name that they enter becomes relevant again at the end of the game. Once the player enters a name, a full motion video sequence takes place showing a white orb descending into the cavern and touching the water below, lighting up the walls. Edge’s unconscious (or dead) body, immersed in the water, absorbed the particles of light which brought the boy back to life. Edge quickly swam to the surface and looked around, amazed that he was alive.

A white orb decends into the water.

Gash next mentioned the Divine Visitor after Edge arrived at the Seekers’ Stronghold. He told Edge that dragons were in the Ancient Age and that the Divine Visitor was the dragon itself, again linking the Divine Visitor to the old world. Zadoc, a compiler of the Seekers, reiterated Gash’s view, telling Edge that, “We knew something would appear to free us from the Tower’s will. It wasn’t until recently that we discovered what would save us. Your dragon is our salvation.”

The dragon program asks the Divine Visitor to press the button. 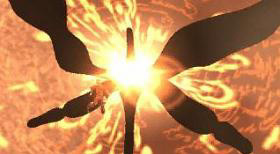 A huge black dragon hovers next to Edge. 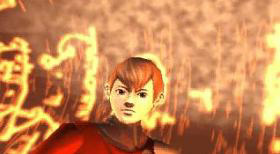 Edge looks in the direction of the player.

The dragon thanked the Divine Visitor, telling the player that he must go. Edge looked towards the screen and said, “So, you were guiding me… Then you must be the Divine…”. The dragon and Edge disappeared into the distance as the player’s line of sight shrunk and then narrowed, blackness filling the screen.