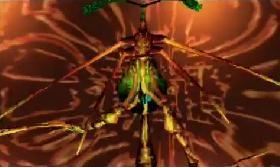 This entry is about the character Sestren. For the location, see Sestren Data Circuit.

Sestren was a living creation of the Ancients that served as the mind and the central nervous system of the Sestren network which controlled all of the Ancient ruins known as the Towers. Sestren was a mysterious entity that lived at the heart of their operations. What little is revealed to players about Sestren is learnt from the Seekers and from Edge’s encounter with Sestren at the end of Panzer Dragoon Saga. The name Sestren is both the name of the being (called Sestren Exsis when players encounter it in its final form) that governs the network of Towers spread across the world, and also the place in which the being itself exists. 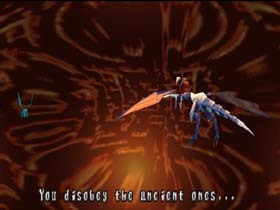 Edge and the Heresy Dragon come face to face with Sestren itself.

Whether Sestren physically existed or not is the subject of debate. How it was constructed to manifest itself as something tangible to the senses is a question that is not answered in the games. Speculation includes Sestren being an artificial intelligence incarnated into a physical form, or part of an elaborate virtual reality in which Sestren is the central program. Where exactly Sestren resided is never explicitly stated in the series. Zadoc writes in Tower Report 3 that to reach Sestren one must “cross the gap in time and space”, suggesting that it may have existed outside of time or three dimensional reality, while Panzer Dragoon Orta’s narrator says that Orta was transported into the circuits of Sestren.

Although Sestren may be considered a he due to its male voice acting, it is questionable whether it was capable of sexual reproduction. The defeated enemy record for Sestren Exsis refers to Sestren as an it. Sestren appears embryonic and organic like the organ of a body and has thin antennas that make it appear to be fragile and not evolved for combat. This frail appearance is a trap to fool unsuspecting opponents into lowering their defences. It sits floating in the nothingness of perpetual bending light while the background pulsates like a beating heart.

Based on the limited knowledge of the Seekers, Sestren existed somewhere between time and space from which it controlled all the Towers by linking them together into a cohesive collective whole. The Seekers knew of no way to reach Sestren except through the Tower. Being outside of time and space yet in a position to wield the power of life or death over the physical world would make Sestren an unreachable enemy for anyone trapped in a linear reality. Azel was the key to unlocking the entrance to Sestren in the end, which she closed afterwards by literally melting the Tower of Uru. 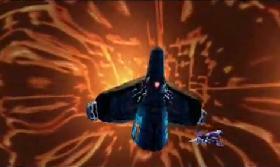 The past comes back to haunt the player literally.

The place itself where Sestren made its home seemed to be a series of spiraling tunnels of folding and unfolding reality with the gleaming symbols or letters of an Ancient language circling around them. While inside Sestren, the background seems to bend as if ripples are rippling across reality.

Sestren threw literal memories of past enemies at the player, which supported the Seekers’ theory that it existed between the dimensions of time and space, perhaps by bridging the gap between the two. However there is nothing in-game to indicate the source of their information and therefore no way to confirm if it is true or not. It is also possible that these memories were merely the virtual constructs of an illusionary world within a world. The defeated enemy record for Sestren Exsis states that it has “the ability to hurl objects from the past and present from an infinite abyss”. 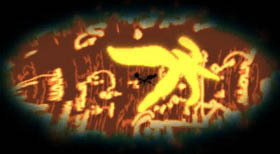 An "impurity" is purged from Sestren.

When the Heresy Dragon confronted Sestren, Sestren adopted the form of a Solo Wing (normal class) as one of his facades. Some fans have given him the title “Anti-Solo Wing”, named after the anti dragons who guard Sestren. This title is unofficial, however. This Solo Wing form may indicate how they are twin entities both designed for a similar purpose. Sestren noticed the return of the Divine Visitor and also noticed it had brought a human with it. It is unclear whether Sestren was referring to the dragon or to the true Divine Visitor, the player. Sestren pointed out by saying that you, referring to the Divine Visitor and/or dragon, was disobeying the Ancient ones by choosing to embrace a different purpose than the one they were meant to fulfill: the will of the Ancients. Players then witness a series of flashbacks of Sestren purging what it calls an “Impurity” from his domain, a black butterfly-like creature, and hunting it down in the real world. In the first flashback that Sestren shows players, the aforementioned intruder stands out from its golden surroundings like pitch black on white as if by not blending with its background it didn’t belong there. Why the Heresy Dragon rebelled and what its original purpose actually was is not explained in these flashbacks. Fans have produced much speculation about what happened before the two enemies who seemed to once perhaps share a common purpose were finally reunited. 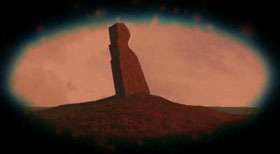 Sestren keeps an eye on everything past and present.

Sestren watched the world through one eye and seemed to have been watching everything for some time. Players do not see Sestren take the form of the golden butterfly-like-winged dragon seen removing the similar yet more conspicuous black intruder from the place it calls home. The golden dragon and Sestren may not have been the same entity, but that remains unclear; graphical limitations may not have allowed room for an actualised ingame model.

Sestren was defeated by Edge and his dragon at the end of Panzer Dragoon Saga. Without their master to control them, it is unclear what the full ramifications of losing control of the Towers will be since they were healing the planet and maintaining the stability of the environment. Following Sestren’s demise, the lands throughout the Continent began to change causing floods and earthquakes, reducing the human population to half of its former size.

The Towers were keeping the planet stable, but when Sestren died it seems they lost control.