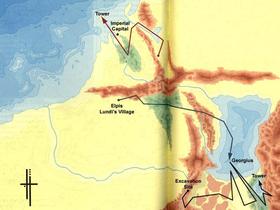 The continent where the Panzer Dragoon stories take place. It is never named in the series, but is referred to simply as “the Continent” a number of times, particularly in Panzer Dragoon Orta’s encyclopaedia. Much like how the Empire was referred to as if it was the only empire known to the people, the borders of the Continent may have represented the limits of knowledge or travel. However, fans can only speculate as to what extent the world had been explored.

The official timeline states that eighty years before the foundation of the Empire, a tribe of Seekers washed ashore the continental coast. These people later formed the Empire.1 This implies that the people who would become the Empire came from either another continent or some islands off the coast of the Continent. The words “washed ashore” may have been figurative; the people who arrived may have built ships that had arrived from afar, although this is not confirmed.

The full size of the Continent is not clear as the maps presented in the official guidebooks only show sections of it, leaving fans to speculate as to what lies to the far north and east. To the west is the coast of the West Sea, near the location of the old Imperial Capital (before Craymen destroyed it). The southern border of the Continent is also missing from the official maps, however we can deduce from Panzer Dragoon Orta’s encyclopaedia that it had at least been reached by the new Empire. The encyclopaedia entry on the Southern Peoples states that the southerners came from an archipelago state that had, “long lost contact with the Continent”. When a civil war started among the southern people, many fled the islands to the mainland of the Continent. Eventually these people joined the survivors of the Old Empire to form the New Empire. 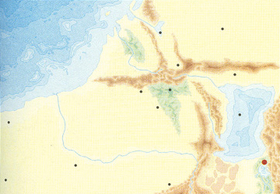 The Tower Distribution map shows that there were many Towers scattered throughout the Continent. Thirteen Towers are displayed on the map, with the red dot representing the Tower near Uru which Azel destroyed. It appears that while some of these Towers brought life to a barren world and maintained the ecosystem, the majority of these Towers were surrounded by desert wastelands. In Panzer Dragoon Saga, when Edge was captured by the Empire, one of the Imperial soldiers told Edge that the Tower burned three continents in one night. This story may have been an exaggerated Imperial legend, but may also have contained some truth of the destructive power of the Towers, representing the devastating consequences that the Towers had on the Continent when the Ancient Age ended.

When Edge and his dragon defeated Sestren, and the Divine Visitor freed the world from the will of the Ancients, the Towers were deactivated. As a result, a period of great change occurred, and the Continent began to reshape itself radically, with changes in the topography and climate continuing for a decade. The warming of the climate caused ice in the polar regions of the Continent to melt, causing large land areas to be flooded. Earthquakes also caused dramatic changes in the surface of the land; new canyons and mountains were formed. Due to these changes, and the changing temperature between different regions, the human population of the Continent was reduced to half of its former size. Eventually the Continent began to stabilise, however the chaos that occurred during the Great Fall made it become generally regarded by the people of the Empire as, “the time of greatest turmoil that man has ever known since the fall of the Ancient Age.”