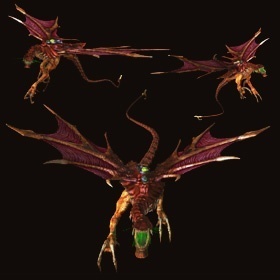 Dragonmares were the first biogenetic weapons of the Empire. They are 25.0 Ln. in length, 5.0 Ln. in height, and weigh 20.0 Ln. The name ‘dragonmare’ means “distorted dragon”, because of their gruesome and deformed physical appearance. The dragonmares are a dragon-type creature, but they are not true dragons. They closely resemble dragons, however. Dragonmares were engineered at the Imperial Academy by the scientists that worked there, and were developed in the bioreactor, also known as the Cradle.

All of the complete dragonmares were identical (with the exception of Abadd’s Mare) in appearance. They were mostly red, but had traces of orange and even a little purple. Right above the control core, there was a morbid-looking face engraved into the dragon’s flesh. The tail of the dragonmare resembled a whip, and at the very tip of the tail was a point that was somewhat similar to a fishhook. The dragonmares did not have eyes, but eyes were not necessary for the dragonmares to manoeuvre (hence the control cores). 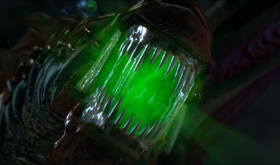 The bioluminary oscillator in action.

Their abilities in battle surpassed every other weapon that the Empire possessed. They shared the strengths of bio-engineered creatures, plus an arsenal of their own nature. The dragonmares may have been made of flesh and bone, but stalwart, armour-like plating covered their body, along with a regenerating exoskeleton. This is one of the reasons why the dragonmares had such high vitality. The dragonmares were also capable of firing high-temperature gelatinous mucus balls from their mouths. These shots were fired very rapidly and accurately, and could lock on to a number of targets. On top of the destructive potential contained in the mucus, the mucus balls had also been found proficient of denaturing the proteins of other biogenetic beasts. The dragonmares used their claws and whip-like tail as weapons, powerful enough to not only sever flesh but stone and steel as well.

In Panzer Dragoon Orta, not much is revealed about the riders of these beasts, however they showed much aggression towards those who opposed them. Without hesitation, they searched the land, slaughtering the residents of the Seeker villages who worked against the Empire. In addition, the riders showed much control over the beasts of which they rode. This is because the dragonmares had control cores fixed into their backs. The method in which these control cores are used is not yet understood, but it is apparent that they do more than just enable the dragonmares to be manipulated. When dragonmare squadron leader, Captain Evren’s dragonmare neared the point of defeat, she enabled a self-destruct mechanism in order to take down the dragon of destruction. Despite this great attempt, however, she failed to do destroy her enemy, although the dragon was wounded to the extent of temporarily losing his ability to fly. 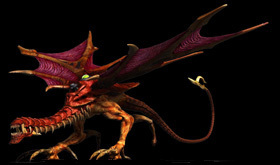 A dragonmare, a weapon of the Empire.

When the dragonmares were not fully developed and ready to enter combat, they were called ‘mare-embryos.’ At this particular stage, the dragonmares were only half-finished, and had yet to receive the control core installation in their backs. To the Empire, mare-embryos were useless since they were not capable of fighting. When six initial prototypes were completed and standing by, the Empire ordered the Armament Production Facility to produce mass quantities of dragonmares. Unfortunately for the Empire, the main operator of the Cradle, the drone Abadd, vanished after completing his research. The sixth prototype disappeared and rumours within the Empire suggested that Abadd had stolen the dragonmare for his own personal use. To the Empire’s great loss, the dozens of dragonmares that were already being produced were only in embryo stage, and therefore the effort to create an entire fleet of dragonmares was futile. 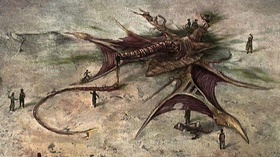 Although the dragonmares were lethal, cunning monsters of war when in battle, they laid perfectly still, silent, and calm when they are were inactive. Because of this, many Imperials believed that dragonmares were not really living creatures, but acted more like puppets, controlled by their masters.

The fact that the Empire decided to undergo research to construct these beings baffles many. For many years the Empire and its citizens had loathed dragons, and the old Empire was almost destroyed multiple times because of them. The answer could be found within the words of the head of research at the Imperial Academy. These words were: “Desperate times call for desperate measures.”