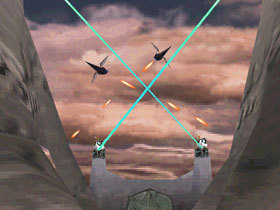 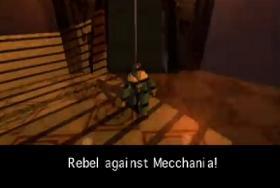 The Emperor orders his servant to attack Meccania.

During the intro for Panzer Dragoon Zwei, the Sixth Emperor says, “Rebel against Mecchania! (sic)”. It is likely that the word “rebel” was a translation error, because the Empire was the dominant power at the time and invaded Meccania first, not vice versa. According to a translation of the World document found on the Panzer Dragoon Zwei disc, Meccania opposed the Empire. The document specifically states that Meccania was a united nation of smaller tribes working together who were researching the technology of the Ancient Age in order to “oppose the Empire”, and makes no secret of the fact that Mecannia was no friend of the Empire.1 Also, according to Panzer Dragoon Orta’s encyclopaedia, Meccania was one of the Empire’s neighbouring nations that existed just south of the Imperial border. It was said to have had power that rivalled even the Empire.

According to the timeline, the Empire claimed that Meccania had hijacked the Empire’s “space battleship”, and used this hijacking to justify invading Meccania in self-defence. However, it is later revealed that this was a lie that was used as an excuse to invade. The Empire invaded Meccania in A.F. 72 and the Empire was victorious. All of Meccania’s lands and technology became a part of the Empire. 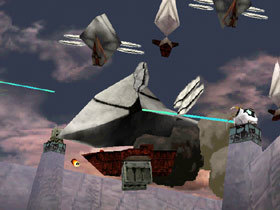 Beam lasers are seen shooting down Imperial warships in episode 2.

During episode 2 of Panzer Dragoon Zwei players fly through a war zone between the two nations, and if players take the ground route they will ride through a fortress where they will see laser beams shooting down Imperial ships, and cutting through their armour as if it were non-existent. If players take the sky route, they see laser beams being fired into the sky from below. Panzer Dragoon Orta’s encyclopaedia calls these beam lasers “blitz cannons”, which were said to have been absorbed by the Empire. Lundi said that, “It was like being in the middle of warring Gods”.

At the start of Panzer Dragoon Saga, the narrator reflects on the rise of the Empire, which gives players more insight into Meccania’s background:

Thousands of years have passed since the fall of the utopian civilization. The survivors live in fear of the biological weapons created by ancient technologies. Then the Empire rose to power with the technology of the lost civilization on their side. The age started anew. The Empire drove away the nightmarish creatures with ancient weapons excavated from the dormant ruins. The people rejoiced, believing that humans could live without fear. But power gave birth to ambition, and ambition to war. The Empire declared war on its neighboring nations, but they too discovered the ancient weapons.

It is clear that Meccania was one such nation that also unearthed the Ancient technology to defend itself.

During Panzer Dragoon Saga, Edge encountered a travelling caravan of hunters who were searching for a new home. One of them, a young boy named Enkak, became ill with a life threatening sickness called Meccania fever. The fever may have been named after the conquered Meccania Federation.