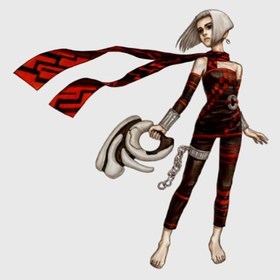 Orta, the protagonist of Panzer Dragoon Orta, was a girl who knew very little about the world or her own past, as she had been imprisoned by the Seekers for as long as she could remember. Orta did not know that she was in fact half drone/half human. Her mother, the drone Azel, used her own genes together with that of a human’s gene data found in Sestren to create Orta. The name of this human was never revealed, but most fans have assumed it to be Edge, who remained in Sestren at the end of Panzer Dragoon Saga.

The Seekers called Orta “the harbinger of destruction” and told her she would only leave her prison when they needed her for war. It appeared that they feared Orta, likely because they thought of her as a weapon capable of controlling the Ancient ruins and bio-engineered monsters, similar to Azel’s original purpose. 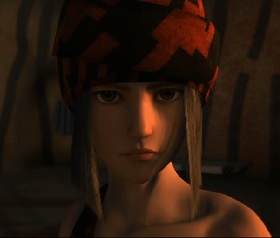 Orta in her cell.

In the first moments of Panzer Dragoon Orta, the Empire launched an attack on the Seekers’ stronghold in Yelico Valley in an effort to capture Orta from them. The Empire’s reasons for wanting to capture Orta appeared to be largely the same as the Seekers, as they needed a drone to control the Ancient ruins, specifically the Cradle. The drone that used to control the Cradle for them, Abadd, had escaped and was nowhere to be found, so they needed Orta to reactive the facility for them.

However, just as Orta was about to be captured by the Empire’s dragonmares, a dragon appeared and rescued Orta from both the Empire and the Seekers. Shortly afterwards, Orta and her dragon encountered the drone Abadd, who told Orta that she needed to “save the world from itself”. Orta chased after the mysterious drone in the hope of finding out what he meant, and perhaps find some answers to the questions about her own past, but lost track of him in the Forest of Mutation. 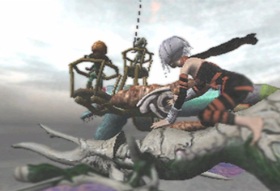 There, she encountered a group of Wormriders, one of whom was called Mobo. Although Mobo initially took her for an Imperial riding a dragonmare and attacked her, he and Orta soon became allies and she was received with warmth when she arrived at the Wormriders’ den. However, due to Orta’s presence the Wormriders’ den also came under attack from the Empire, and Orta assisted Mobo in defending them from the attack. During the attack Mobo was shot down, leaving Orta and her dragon alone in their fight against the Imperial fleet. During the battle, Orta heard the Imperial officers giving orders to their troops, telling them that they should show no mercy for a drone. Learning that she was in fact a drone was a great shock to Orta and made her feel more alone in the world than ever before. She did not have much time to think about this revelation, however, as the Empire’s dragonmare squadron had caught up to her and launched their attack. With the help of the dragon she was able to defeat the squadron, but in a final effort to kill Orta the captain of the dragonmare squadron, Evren, self-destructed her dragonmare. Orta and her dragon were caught in the explosion and plummeted out of the sky. 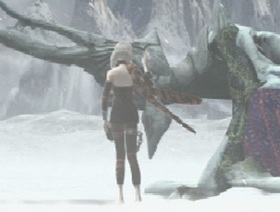 When Orta woke up, she found herself in a snowy landscape. She found her dragon not far away, but was shocked to see that the seemingly invincible creature was now clearly injured. With Orta’s encouragement, the dragon stood up and limped across the snowy landscape, eventually managing to recover enough strength to fly again.

On their path, the dragon and rider pair defeated a bio-engineered monster called an els-enora, but when Orta saw that the els-enora had children she realized the creature was only trying to defend her young. Orta regretted her actions and flew away from the wounded creature. At that moment, Abadd reappeared and annihilated the els-enora family, criticising Orta for being unable to kill “a simple creature”. Orta was upset, telling Abadd that he didn’t need to kill them and questioned his ethics, asking him, “Why? Why do you kill?” The drone failed to answer the question, instead telling Orta he needed her to complete his mission. With nowhere else to go, Orta decided to follow Abadd. 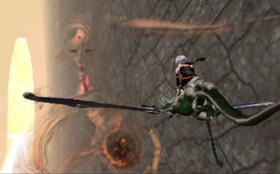 Abadd took Orta to an Ancient ruin that lead to the Sestren system, and revealed to Orta that this was the place where she had been created. It was there that Orta discovered a recording from Azel that explained her birth. In the message Azel explained that, after the end of her fruitless searches, Orta was her only answer. It is not revealed what Azel meant, but she could have been referring to her search for Edge, which she may never have found (except for his gene data in Sestren). It could also mean that she was searching for a reason behind her own existence as a drone, and creating Orta gave her life meaning. According to Azel, Orta had the power to change the world. However, what this power actually consisted of is not revealed in Panzer Dragoon Orta. Azel may simply have meant that Orta could choose to make a change in the world, unlike other drones who lacked the freedom to exceed their Ancient programming.

After the message had finished playing, Abadd reappeared. Now that Orta knew the truth about her birth, he revealed to her his own plan to destroy the Empire and create a new race of drones to rule the world. However, he was unable to complete his plan because the Ancients who created him had ensured that drones were unable to reproduce and forced to live and die as slaves. Since Orta was an exception to this rule, Abadd needed her body to learn the secrets behind her genetic code. After hearing Abadd’s intentions, Orta refused to help him, causing Abadd to attack Orta and her dragon.

Orta followed by her dragon pup.

In the ensuing battle, Abadd was defeated and left the Sestren system. Orta chased after him, arriving at the Imperial Capital which had plunged into chaos as Abadd had released all the dragonmare prototypes on the Imperial forces surrounding the Cradle. In the finale of Panzer Dragoon Orta, Orta fought and defeated Abadd. After Abadd’s defeat, Orta’s dragon collapsed and fell to the ground just as they had landed. Orta was upset, pleading him not to die. But the battles had taken their toll on the body of the dragon, and he passed away. However, the dragon mysteriously left behind an heir. In the epilogue of Panzer Dragoon Orta, Orta is shown traveling across a peaceful landscape with a small dragon pup, her destination not revealed.