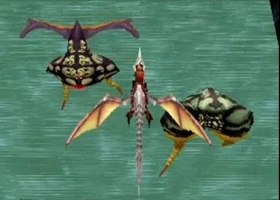 Urchins were a species of slow moving mutated monsters who lived in the mountainous regions of the Panzer Dragoon world. Players controlling Edge and his dragon can encounter urchins in the Canyon Deep Gulch area of Panzer Dragoon Saga. Urchins were known for firing spines in order to kill or immobilise their prey. Once the prey was no longer moving, the urchins would then feed on its body, either alive or dead.

Urchins came in two varieties, male and female. The male urchins were called gelata urchins, and were weaker than the females. The males often hunted in pairs of two males, although sometimes they hunted alone, or males hunted together with females. The stronger female urchins went by the name of magnata urchins. Physically they looked similar to the gelata urchins with the exception of a brown and orange fin that extended from the top of their bodies. These females had the advantage over the males of having the ability to use telepathy to guide her spines towards her prey. These more lethal spines than those of the males were called magna spines. 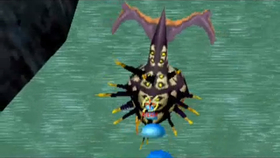 A magnata urchin prepares to fire her spines, but Edge gets a shot in first.

Urchins were weak at the front, so players controlling Edge had an advantage over the urchins by moving to this position and firing Edge’s gun at the weak spot. However, the urchins also shot spines from the front, making this an unsafe area shown with no colour on the radar. Since urchins roamed the valley in groups, they would often face different directions from other urchins in the group, making it more difficult to avoid the urchins spines while targeting their weak points. Players had an advantage if they stayed either to the sides or the back of the magnata urchins unless to quickly get a shot in.