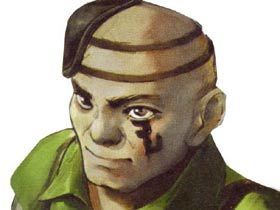 Jared was a shop keeper in Zoah and a member of the Seekers of Skiad Ops Gash. Throughout Panzer Dragoon Saga, Jared kept an eye on Edge on behalf of Gash. It is likely that he moved to Zoah to be near Edge as he claimed to be a new shop keeper in Zoah when Edge arrived there.

Jared knew about the events of Panzer Dragoon Zwei and informed Edge about the battle between two dragons that took place in Georgius years earlier.

Jared was asked by Radgam to fix an old gun belonging to Radgam. However, Jared told Edge that he thought he should turn Radgam down as he was “too old to hunt”.

When the Empire tried to take over the town, Jared believed it might be better to leave Zoah. This foresight would apparently explain why he was able to get out of Zoah in time.

Jared heard a rumour that someone was searching for the Tower. He told Edge that the person must be crazy. Panzer Dragoon Saga does not reveal whether he actually knew that Edge was looking for the Tower or not. 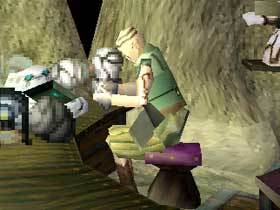 Jared in his shop at the Seekers' Stronghold.

When Edge sold Radgam’s gun to Jared, Jared upgraded the gun to an Assassin. He told Edge that he wanted to rescue the people of Zoah from their fate.

When the Seekers evacuated their stronghold, Jared stayed behind to supply Edge with weapons and other items to aid him in his battle against Sestren.