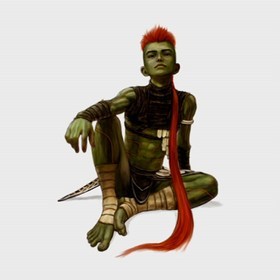 Mobo belonged to a tribe of people called the Wormriders. These people managed to survive in environments that were thought to be uninhabitable for humans. They had also successfully domesticated bio-engineered creatures like the baldor, on which they flew throughout the land, hunting for other mutated bio-monsters. Mobo appeared to keep his baldor under control through the use of a device called a power stone (mentioned in the Panzer Dragoon Orta manual). This glowing stone was attached to a staff which Mobo waved in front of Hamah-hamah (the name of his baldor). During the time of Panzer Dragoon Orta, Mobo had three wives.

Mobo encountered Orta early on in the game while he was hunting in the Forest of Mutation. Although at first he mistakenly thought Orta was an Imperial soldier and attacked her, the two eventually became friends. Orta was invited to stay at the Wormriders’ village, which was actually situated on top of a lathum, a gigantic bio-monster. Mobo even asked Orta to become his wife, but the leader of the Wormriders, Elder Ponta, laughed at Mobo’s proposal and told him that his other wives would probably not agree.

Mobo and his baldor together with Orta and her dragon.

Mobo and his baldor were shot down during the Imperial attack on the Wormrider village, but they survived. After being shot down, Mobo’s story is told during Panzer Dragoon Orta’s sub scenario 2, “The Fury of Mobo”. In this sub scenario, Mobo, riding Hamah-hamah, is a playable character. Although Hamah-hamah was wounded, Mobo was able to ride his baldor across the Glacial Plains in order to return to the Wormriders. Mobo was later reunited with Orta when the Wormriders joined the chaotic fight between the Empire’s forces and Abadd’s dragonmares, allowing Orta the chance to pursue and defeat Abadd.