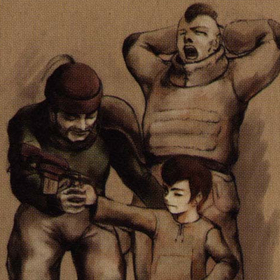 Mercenaries were hired to guard Excavation Site #4 by the Empire up until and during the introduction of Panzer Dragoon Saga. The Empire had been desperately searching for something amoung the ruins from the Ancient Age, an operation which the director of the site had been involved with for twenty years. The mercenaries, captained by Edge’s Captain, guarded the digging operation.

One day Edge, who had been fostered by the Captain of the mercenaries, discovered an Ancient drone buried in the ruins. Shortly afterwards, Craymen’s Black Fleet invaded the excavation site and killed two of the mercenaries, Rhua and the Captain. Edge was also shot, but he survived and chased after Craymen, determined to get revenge for the death of his friends.