Like Elpis and Zoah, Cainus appeared to be a walled village, likely built that way as a defence against the monsters.

When Gash first met Edge he referred to the people of Cainus as “my people”, so it appears that the residents of Cainus were partially or completely made up of Seekers. 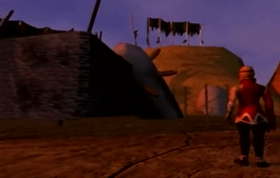 Gash examines the ruins of Cainus.

Gash was puzzled by the attack, not understanding why the monsters had decided to attack Cainus when they did. Both Edge and Gash camped the night in the ruins of Cainus, while Gash thought it over. He found the dead remains of a Seeker in the village, along with a message. Gash told Edge that the Seeker had written the message in his own blood stating that Craymen had led the monsters into the village. Gash may have been speaking figuratively when he said that message was written in blood, however it is not confirmed either way. It is unclear why Craymen led the monsters to Cainus, if the message was indeed true.