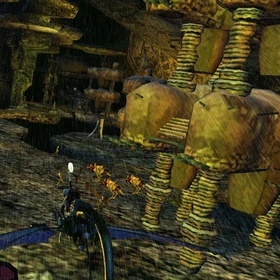 According to the information in Panzer Dragoon Orta’s encyclopaedia, Yelico Valley is situated in the western most regions of the Continent. It is the location of the first episode of Panzer Dragoon Orta which is called ‘A City in the Storm’. The Seekers settled in the ravines that were created due to thousands of years of erosion. The encyclopaedia also mentions that hundreds of years ago many followers of the local custom travelled to this valley as a sort of pilgrimage, before the bio-monsters drove them away. This could be suggesting that Yelico Valley may once have been an Ancient city, although it is also possible that the former residents of Yelico Valley lived there after the Ancient Age, given the use of the word “hundreds” rather than “thousands”.

The Seekers placed their houses on the plateaus in the ravine, connecting them through long ladders and bridges. They also placed turrets on various locations together with searchlights to defend themselves from an enemy attack. However, these defences proved to be inadequate to stop the Imperial assault in 156 A.F. Players controlling Orta and her dragon also have the option of destroying these Seeker turrets, however this action is not required for the game to progress. Whether or not the plateaus were actually naturally formed by erosion, or if they were designed like this by a former civilisation or the Seekers is unclear.

Before confronting the Imperial assault carrier Vermana, Orta and her dragon flew through a small tunnel in Yelico Valley. It appears that the city’s water was collected and transported further underground, perhaps in a reservoir. The waterwheels may have been used to generate power to support the city, either for the Seekers or a previous civilisation who resided there.