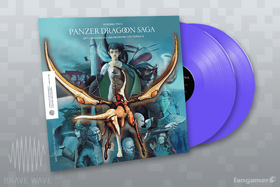 A vinyl version of Resurrection: Panzer Dragoon Saga 20th Anniversary Arrangement, released in May 2018.1 It was distributed by Fangamer in North America and Bigwax in other parts of the world.2. The vinyl edition features dual covers with the English title on one side and the Japanese on the other.

Bravewave released 100 limited edition copies of the vinyl during November/December 2018. These were numbered and signed by Saori Kobayashi.3