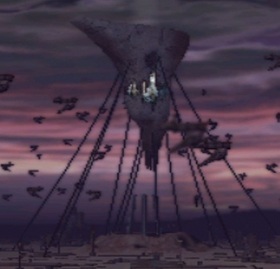 The Cradle was an Ancient bio-reactor discovered by the Empire. It was excavated from within the depths of an Ancient ruin, and the Empire used it to create the dragonmares, bio-genetic creatures that shared many characteristics of the dragon who destroyed the old Empire in many ways. The Cradle was located near the Imperial Capital, and floated above the landscape using Ancient float engines. It was attached to the landscape below by great cables.

The Cradle could not be operated by humans, so the Empire unearthed an interface drone named Abadd to operate the facility. Once Abadd had completed his research, which included creating a dragonmare of his own, he betrayed the Empire. The Empire began searching with desperation for another operator to reactivate the Cradle.

Towards the end of Panzer Dragoon Orta, the Cradle came to life again as Abadd returned to the area. The Imperials were pleased, and began to awaken the rest of the dragonmares, believing that they had no more use for drones. At the same time, Orta and her dragon reappeared from Sestren, infiltrating the lower research facility and destroying the dragonmare embryos. 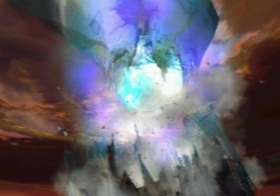 The Empire released the completed dragonmares. However, led or controlled by Abadd, they turned against the Empire. In the battle the Cradle burst free of the cables that had held it to the ground and began to ascend upwards. The Cradle began to fall apart, leaving just the upper part of the facility. Shortly afterwards, light beams erupted from the core and pulled the dragonmares back into the heart of the facility. Finally the core of the Cradle crumbled away revealing an embryonic lifeform, Abadd’s enhanced dragonmare.