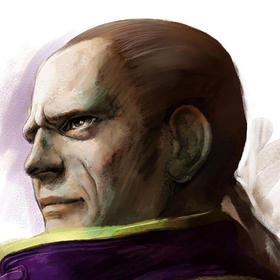 Arwen was a member of Craymen’s Black Fleet. He appeared to be the second in command after Craymen, and commanded the fleet’s flagship when Craymen had left to find the Tower.

Arwen was apparently responsible for the destruction of the Imperial capital, telling Craymen that the operation was proceeding as planned shortly before the fleet arrived at Excavation Site #4. Craymen then told Arwen that now was the time for rebellion, and Arwen proceeded to participate. When the fleet arrived at excavation site, Arwen knocked Edge unconscious with the butt of his gun after Edge told Craymen that he had seen Azel. He told Craymen that there was no turning back now. He may have been making a general statement about the rebellion or perhaps thought Craymen was having second thoughts when Craymen told Zastava to leave the mercenaries unharmed.

"There's no turning back now."

When Edge went to find Craymen in the Forbidden Zone, Arwen was apparently a decoy who commanded Craymen’s flagship to make Edge believe that he was hunting down Craymen himself. When Edge defeated the flagship commanded by Arwen, he boarded the ship himself and held a gun to the wounded Arwen, demanding to know where Craymen was. Arwen responded by telling Edge that he fell for their trap and told him that Craymen should already be at the Tower. He told Edge that he had done well tracking down the Black Fleet, but that his quest would now come to an end. His last words were, “She will finish you.”

Edge was confused about who she was, but he soon found out. Atolm, Azel’s dragon, fired a laser at the smoking flagship, sending Edge leaping for cover and ending Arwen’s life in the process.