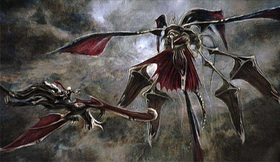 The creature known only as Abadd’s Mare was the sixth dragonmare created by the Empire with the assistance of the drone Abadd, before he became an Imperial traitor. Abadd’s Mare is the final boss of Panzer Dragoon Orta and can be defeated by players controlling Orta and her dragon in the final episode of the game known as ‘The End of Destiny’.

Like the other dragonmares, Abadd’s Mare was created using the Cradle, but it had a different appearance and was unique in many other ways. Although it began as a regular dragonmare like the ones it destroyed, Abadd was able to modify his dragonmare in more than one way.

Abadd's Mare in its regular form.

Abadd’s Mare (in its regular form) was massive, much larger than the other dragonmares. It was a silver-grey colour which matched Abadd, and had multiple reddish wings that resembled tentacles in some ways. It had several methods of attack, one of which was a powerful homing laser that resembled the Heavy Wing (a form that Orta’s dragon could become). It could fire concentrated lasers in a somewhat ambush style, vanishing and reappearing from the boundaries of the battle area. 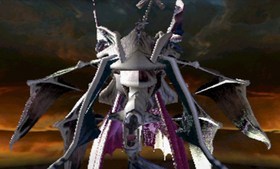 Abadd’s Mare could also take on multiple forms using the power of the Cradle. In the final episode of Panzer Dragoon Orta, Abadd’s Mare took on the form of a protective shell. Once the shell had cracked, Orta and her dragon fought it in its regular form once again. As the mare weakened, Orta and her dragon fought Abadd’s Mare in its final form, a white mare with a narrow, bony tail. The dragonmare disappeared at the end of the battle. It is unclear what happened to it.