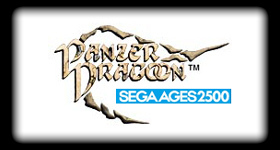 The 2500 series is made up of re-releases of old Sega games, though the exact nature of each release varies somewhat. Some games (such as Vol. 16: Virtua Fighter 2) are mostly straight ports of the originals, while others (such as Vol. 1: Phantasy Star Generation 1) are closer to being remakes, featuring updated graphics, updated audio and changes to gameplay. Other releases fall somewhere in between. The games in the series are released only for the PlayStation 2, and only in Japan.

Sega Ages 2500 Series Vol. 27: Panzer Dragoon is one of the “in between” games, in that it has been updated but is not really a remake; it is mostly the original game from 1995, but it has some graphical enhancements and other extra bells and whistles. The player has the choice between playing in “Sega Saturn mode” or “arrange mode”: in the former the game looks much like the original, while in the latter the dragon and some of the larger enemies have new, more detailed 3D models. The game also runs at a higher resolution.

The arrange mode features a menu of unlockable options and extras, bringing the game in line with Panzer Dragoon II Zwei and Panzer Dragoon Orta, which have always had unlockable extras. The extras range from the usual suspects, such as a level select and image gallery, to more unique things, including an audio commentary featuring Yukio Futatsugi (director of the original game).