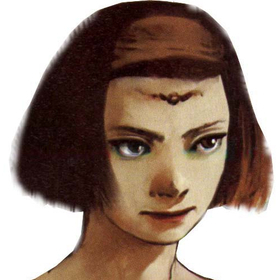 Jael was a young lady who lived in Zoah. She worked for Juba in his bar. It appears that Juba employed her for the purpose of attracting men to the bar.

Jael was originally from the village of Verato. The village was destroyed by the Empire, so as a refugee she moved to Zoah’s Liberal District. Edge gave Jael a Verato Pipe that he received from Raul. After receiving the pipe, Jael became more friendly towards Edge, telling him that the pipe was a treasure of the village. Jael told Edge, “you keep looking at me… do you like what you see?”, although it is unclear whether Edge was physically attracted to her; Jael may simply have been flirting with Edge.

Jael revealed to Edge that she used to work on a farm when she lived in Verato. She preferred that job to working in a bar and missed her old life in Verato. She had planned to save up enough money working in Juba’s to leave Zoah; it is not revealed if she had a destination in mind. 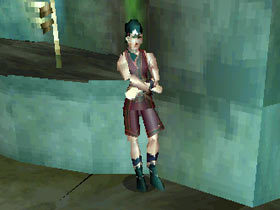 Jael requested that Juba give Edge a discount on drinks to repay him for giving her the Verato Pipe. Juba complied with Jael’s request.