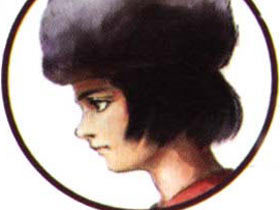 Fei was member of An’jou’s caravan. She was the daughter of Baicah and Kou. Fei was a shy girl, and at first when Edge would try to talk to her she would use the excuse that she had too much work to do to avoid conversation. However, as Fei became more used to Edge’s presence her feelings towards him changed. She had been told (presumably by her mother) that she was not allowed to talk to strangers.

She had a favourite coolia called Marcus.

Fei often worried when the hunters were not around her, as she had not had much experience away from home. Before the monsters attacked her village she had never left the village. However, later in Panzer Dragoon Saga, Fei told Edge that she was no longer afraid of the outside world because he was in it. Fei gave Edge a Palmer Amulet as a gift. Players controlling Edge have the option of giving Fei an Amirkhan Ring in return. 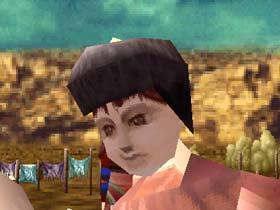 Fei outside tending to Marcus the coolia.

Fei looked after Enkak when he was ill with Meccania fever. When Edge found a cure for Enkak, Fei told Edge that she is glad that he is there to help them. She stated that Enkak looked as if he had never been ill.

When Zoah was destroyed, Fei stated that she did not think they would ever find a place to live. In Panzer Dragoon Saga it is not revealed whether or not she was correct; Panzer Dragoon Orta sheds no light on the caravan’s fate. Fei found the Forest of Zoah to be beautiful and would have liked to have lived there.

Fei was attracted to Edge, but did not have the courage to ask Edge if he would have her as his bride. However, her mother Kou stepped in and asked Edge herself on her daughter’s behalf. Fei told Edge that it was his decision and that she would be waiting for him.